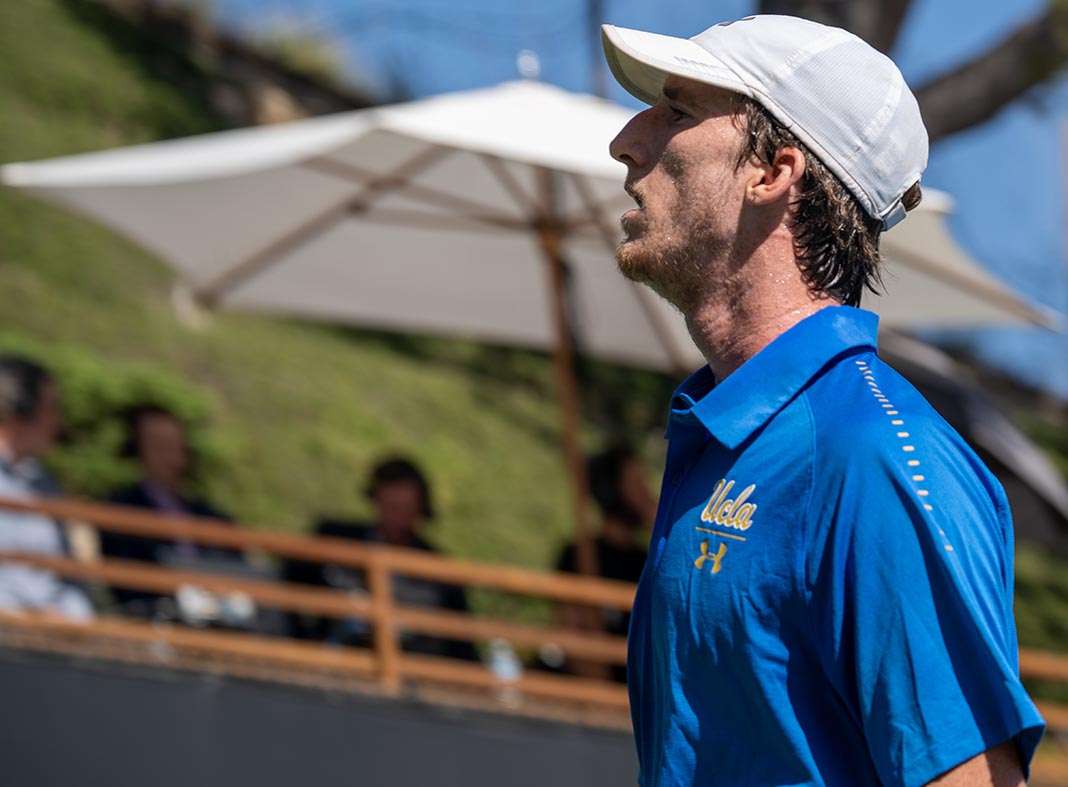 The opening round of play at the 2020 Oracle ITA Masters by UTR will begin in San Diego Friday morning. The “open” event features top talent from the collegiate, professional and junior ranks.

Pepperdine Women’s tennis along with the UCLA Men will be well represented. Wave standouts Lahey, Failla, and recent transfer from Texas, Ryngler, are in the top five UTRs of the draw. The Bruins’ Smith and Nanda round out the top five on the men’s side. They join Ohio State’s Kingsley and former Trojans Sarmiento and Holt.

Eight athletes were given wildcards into the Masters – four men, four women. The 50-50 mix of juniors and collegiate players will look to make the most of their wildcards as they begin play on Friday.

Top 5 Men Players According to UTR

Former USC Trojan Raymond Sarmiento enters the Masters as the highest rated men’s player. He is currently ranked No. 389 in singles and has a career high ranking of 287. Sarmiento is on a three-match winning streak heading into San Diego. While at USC, he played doubles alongside Steve Johnson. Sarmiento also shined in doubles play. He was named an ITA Singles All-American every year since his freshman season. He was ranked No. 8 in the nation at the start of his senior year.

After the pandemic cut his senior season short, Brandon Holt made the decision to turn pro. Holt is currently ranked No. 574 in the world and will come to San Diego on a seven-match winning streak. Holt was a standout for USC. He was a four-time ITA All-American and was named the ITA Southwest Region Senior Player of the Year. Holt helped the Trojans win the 2020 ITA National Team Indoor Championship. He began his final season ranked No. 5 in singles. Holt won the Oracle ITA Masters in 2017 starting a period of back-to-back-to-back USC victories at the championship.

ITA All-American Cannon Kingsley enters the Masters looking for his first win at a major ITA tournament. During his phenomenal freshman season, Kingsley won the consolation bracket at the ITA All-American Championships. He stayed in the top 25 of the Oracle ITA Singles Rankings the entire season. Altogether, his debut campaign earned him the honor of ITA Rookie of the Year. Kingsley competed in Week One of the ITA Tour: Fall Circuit by UTR where he fell to Michigan’s Patrick Maloney in his opening match.

In 2019, Keegan Smith reached the finals of the Oracle ITA Masters. He comes to San Diego looking for his first ITA championship title. During his sophomore season, Smith paired with Maxime Cressy to win the NCAA Doubles National Championship. He is a three-time ITA All-American and holds a career-high ranking of No. 4 in the Oracle ITA Singles Rankings. Smith has been playing the West Coast Pro Series this summer and has won 15 out of his 17 matches. Most notably, in early August he posted a straight set victory over No. 1 seed Raymond Sarmiento.

The Bruins No. 2 comes to San Diego with the fifth highest UTR in the men’s draw. He will open play against wildcard Ethan Quinn. During his sophomore campaign, Nanda reached a career-high ranking of No. 10 in the Oracle ITA Singles Rankings. As a result, he was named the ITA Southwest Region Player to Watch.

Top 5 Women Players According to UTR

Former Gonzaga standout Sophie Whittle comes into the Masters as the highest rated woman. Currently, Whittle is playing on the pro circuit where she is ranked No. 410 in singles. This summer she played in the West Coast Pro Series and she is entering the event on a five match win streak. During her senior year, Whittle was named an ITA All-American, ITA Arthur Ashe Leadership & Sportsmanship winner, and,the WCC Player of the Year. Additionally, Whittle become the first ITA National Champion in school history after winning the ITA Riviera All-American Championships. While in college, Whittle competed in the All-American Championship along with the Oracle ITA National Fall Championships, but never the Oracle ITA Masters.

After deciding this summer to return to Pepperdine for a fifth year, Ashley Lahey is looking to repeat as the Oracle ITA Masters champion. Lahey put together a spectacular senior season last year. She won back-to-back ITA national championships at the Oracle ITA Masters and the ITA All-American Championships. Lahey then went on to be ranked as the No. 1 singles player in the nation for the majority of her senior season. In addition to her championship titles, she was named the ITA Senior Player of the Year and an ITA Singles All-American three times. Lahey has not competed since Pepperdine’s last dual match against Michigan in March.

Lexi Ryngler is one of four Pepperdine student-athletes competing this weekend at the Masters. After competing for the Texas Longhorns her freshman year, she is back in her native California. In her debut fall college season, Ryngler won four top 30 matchups — most notably taking down No. 7 Sara Daavettila. Ryngler won the ITA Texas Region Singles Championship to punch her ticket to the 2019 Oracle ITA National Fall Championships. The former Longhorn finished last season ranked No. 53 in the Oracle ITA Singles Rankings. This will be the first tournament that she suits up for the Waves.

USC’s Angela Kulikov is back for a fifth year after her senior season was cut short by the pandemic. During her senior year, Kulikov played at No. 1 singles and recorded wins over three top 25 players. In the fall, she competed at the ITA All-American Championships and the Oracle ITA National Fall Championships. Additionally, Kulikov won the women’s singles at the Milwaukee Tennis Classic.

Blue Chip recruit for the Class of 2022, Ethan Quinn, enters the tournament ranked No. 1 in junior play according to the USTA. He comes to San Diego from his hometown of Fresno, California. The top junior has an overall record of 55-13 and enters the tournament as a Wild Card for the Intercollegiate Tennis Association.

Hailing from Coronado, California; the former Blue Chip recruit Ryan Seggerman enters the event as one of the Intercollegiate Tennis Association’s wildcards. He is now on the Princeton roster entering the 2020-21 season as a senior. Ryan was ranked as high as No. 124 in singles and went 13-10 in singles with a 5-3 record in the fall and an 8-7 record in the spring.

Kyle Kang is already making waves in California. The Blue Chip recruit for the Class of 2023 enters the event as a wildcard for the Barnes Tennis Center. His best win in 2020 is over Will Peters of Princeton University in August. Ranked as high as No. 41 according to the USTA, Kyle looks to keep his four game win streak alive this weekend.

An incoming freshman at San Diego State, Judson Blair was a five-star recruit and ranked No. 21 according to the USTA. He was a four varsity letter student-athlete in high school. His biggest accomplishment on the court comes as a win at the USTA National Level Three Tournament in September 2019.

Former five-star recruit Cami Brown will make her Oracle ITA Masters debut as a California Golden Bear. A native of California, Brown was ranked as high as No. 52 in the Class of 2020. Brown comes into the tournament on a four-match winning streak and will face blue-chip recruit Rebecca Lynn.

ITA Wildcard Marianne Argyrokastriti is an incoming freshman on the Arizona State women’s team. Argyrokastriti hails from Greece and trained in Belgium at the Justine Henin Academy. The Sun Devil was a part of the Greek National Team at the European Summer Cup Championships in 2019 and was a quarterfinalist at the ITF $15,000 Futures Event in Brussels. She will face Cal’s Haley Giavara in the opening round of the Masters.

Blue-chip recruit Tsehay Driscoll heads to San Diego as the USTA SoCal wildcard. Currently, Driscoll is the No. 22 recruit in the Class of 2023. Driscoll competed at last weekend’s ITA Tour: Fall Circuit by UTR event hosted by Weil Tennis Academy. The junior will face the tournament’s No. 1 seed Sophie Whittle in the opening round.

San Diego native and five-star recruit Kaila Barksdale comes in as the Barnes Tennis Center wildcard. Barksdale has made noise nationally — she is currently ranked No. 29 in the Class of 2022. Barksdale has been playing tournaments around SoCal including an ITA Summer Circuit event at the Barnes Tennis Center where she reached the semifinals. The junior will look to take down University of San Diego’s Elizabeth Goldsmith in the opening round.