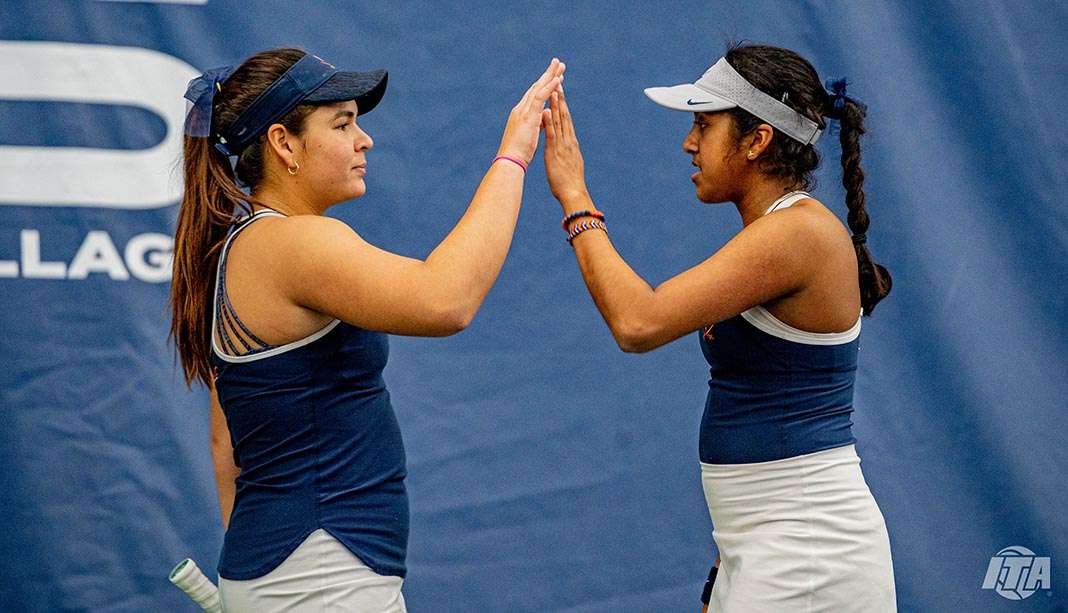 The Lousiville Cardinals are known for their women’s tennis team’s outstanding achievements on the court, in the classroom, and in the community. In 2014, the doubles duo of Fellerhoff and Shine became the first Cardinals ever to advance to the NCAA National Championship. During the 2019-2020 season, the UL women’s tennis helped their athletic department generate more hours of community service than any other Power Five school.

Follow Louisville to see where your UTR stacks up!

The Virginia Tech Hokies have a rich tradition with their tennis program on campus. For their excellent display of character, the 2007 team was the recipient of the ACC Sportsmanship Award. Additionally in 2015, the Hokies advanced to the second round of the NCAA tournament for the first time in program history. Individually, Francesca Fusinato was named the 2017 ITA Senior Player of the Year for the Atlantic Region — the first senior in program history to receive the award.

Follow Virginia Tech to see where your UTR stacks up!

The Boston College Eagles are making big strides within their women’s tennis program. In 2019, BC made its first trip to the NCAA tournament since 1997 and just its second overall in program history. Even though last season was shortened due to the pandemic, the Eagles delivered in the classroom. In 2020, the BC women’s tennis team was awarded with the NCAA APR (Academic Progress Rate) Public Recognition Award for the 4th year in a row. Each year, the awards are bestowed upon teams finishing in the top 10 percent of their respective sport based on the most recent multi-year APR.

Follow Boston College to see where your UTR stacks up!

The Clemson Tigers have a history of success in their program. In 2004, Coach Harris led Clemson to the NCAA Final Four for the first time in program history. Coach Harris was the first coach to lead a Clemson women’s sports team to an NCAA Final Four in school history. The Tigers made back-to-back NCAA Final Four runs returning again in 2005. Individually, Gigi Fernández became the first Clemson player to reach the finals of a national singles tournament. In 1992 and 1996, she won an Olympic Gold Medal in doubles. Additionally, she won eight doubles Grand Slam titles and was inducted into the Clemson Hall of Fame.

Follow Clemson to see where your UTR stacks up!

Notre Dame is a tradition-filled university known for their athletics and women’s tennis is no exception. In 28 seasons at the Eck Tennis Pavilion, the Notre Dame women’s tennis team has never had a losing season. They hold a .812 winning percentage when playing at home. At a national level, Notre Dame has advanced to the NCAA Round of 16 on nine occasions, including three appearances in the quarterfinals in 1996, 2006, and 2007 and back-to-back semifinal appearances in 2009 and 2010.

Follow Notre Dame to see where your UTR stacks up!

According to current Head Coach Younes Limam, the Syracuse Orange success has come through diversity and international experience stemming from recruiting all over the world. When Coach Limam was hired to lead Syracuse University’s women’s tennis program in 2014, the program had never made it to the NCAA postseason. Five years and two NCAA tournament berths later, Syracuse has reached yet another milestone. The Orange competed in its first-ever ITA National Team Indoor Championship. In 2019, the program reached another first — ranking as high as No. 10 in the country.

Follow Syracuse to see where your UTR stacks up!

The Miami Hurricanes have some golden memories in their women’s tennis history books. The Hurricanes rank top-10 all-time in NCAA Team postseason statistics having two finals berths, 12 Elite Eight trips, 23 Sweet 16 berths, 54 wins, and 34 appearances. Throughout the years, the team has produced 66 ITA All-America honors that were achieved by 26 players. Additionally, the team competed for two seasons without losing a singles match.

Follow Miami to see where your UTR stacks up!

The Wake Forest Demon Deacon women’s tennis team is always breaking records. The team saw their best seasons in the early 2000. The Demon Deacons reached their highest all-time ITA ranking at No. 2 in 2000 and 2001. Be a Bielik was a big part of those successful seasons. At the individual level, she became the first Wake player to be ranked No. 1 in singles and doubles in 2000, 2001, and 2002.

Follow Wake Forest to see where your UTR stacks up!

The Florida State Seminoles are slowly shifting their attention from the sports of football and basketball to their successful tennis team. It started in 2000, when the Florida State University women’s tennis team won the women’s Golden Torch Award for the fourth year in a row with a grade point average of 3.761. Since the USTA National Campus in Florida has been built, FSU and UF had some historic matches there. The Seminoles’ first meeting with rival Florida at the USTA National Campus in Orlando was in front of the largest women’s college tennis crowd ever (1,917) and the first ever college tennis match broadcasted on the Tennis Channel.

Follow Florida State to see where your UTR stacks up!

The Virginia Cavaliers have built a powerhouse of a tennis program on their campus. Over the course of their women’s tennis history, the ladies have appeared in 19 NCAA postseason team tournaments. Recently, UVA women’s freshman Natasha Subhash was named the ITA Atlantic Region Rookie of the Year. She’s the second-consecutive Cavalier to win the award after Amber O’Dell took home the honors last season. Their teammate Rosie Johanson won the Cissie Leary Sportsmanship Award.

Follow Virginia to see where your UTR stacks up!

The Georgia Tech Yellow Jackets are an established program on their campus, in the ACC, and nationwide. Their most historic moment was achieved in 2007 when the Yellow Jackets won their first ever national championship title. The Jackets do not only excel on the court. As students, the Yellow Jackets also reached the highest GPA of any athletic program in school history with a 3.71 mark in 2012 under Allison Silverio’s watch. Silverio was also named into the Georgia Tech Hall of Fame.

Follow Georgia Tech to see where your UTR stacks up!

Prior to the 2020 season, the North Carolina State Wolfpack accomplished one of their best seasons ever. In 2019, Coach Earnshaw coached Anna Rogers and Alana Smith to NC State’s first ITA All-America honors. Legendary Coach Simon Earnshaw is also considered one of the most winningest coaches in NCAA Division I women’s tennis history. Moreover, the Pack notched its highest finish ever in the final edition of the 2019 Oracle/ITA Division I Rankings, checking in at No. 11.

Follow NC State to see where your UTR stacks up!

The Duke Blue Devils have not only created a winning culture, but made their players even better human beings. In 2009, Duke captured its first national title in women’s tennis and the 10th overall national trophy in school history. The success stems from one of the winningest coaches in the nation, Jamie Ashworth, who is currently in his 24th season. Meible Chi was named 2020 Intercollegiate Tennis Association Arthur Ashe Jr. Leadership and Sportsmanship Award recipient — the first player in Duke women’s tennis history to claim the award at the national level.

Follow Duke to see where your UTR stacks up!

The North Carolina Tar Heels are considered to be a contender for a national title on a yearly basis. The Tar Heels have won the ITA National Team Indoor Championship four times within the past seven years (2013, 2015, 2018, 2020). Coach Brian Kalbas, who is the most winningest coach in the ACC, has produced some special players. He helped Sara Anundsen and Jenna Long in doubles in 2007 and Jamie Loeb in singles in 2015 to individual national championships. Throughout UNC tennis history, the program has 41 ITA All-American honors collected by 23 players.

Follow UNC to see where your UTR stacks up!

Interested in learning more about the teams in the ACC? Check out our Division I Women Teams page to connect with them on social media and learn more!