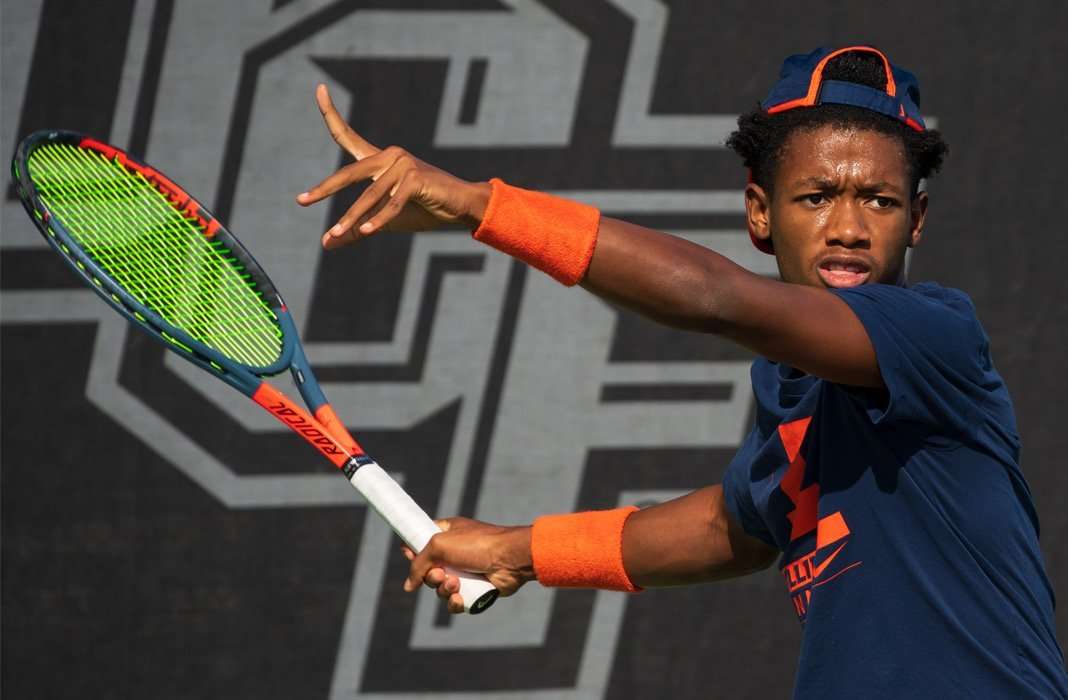 The opening round of the 2020 Oracle ITA National Fall Championships is in the books. The players battled through some sprinkling showers and some gusty winds. All seeded players moved on to the Round of 16 — besides Stanford’s Alexandre Rotsaert who was forced to retire.

Play will resume tomorrow at 9 AM ET at the USTA National Campus. The Round of 16 and quarterfinals matches will be played tomorrow. All matches will be streamed on PlaySight barring any technical issues.

The men’s and women’s finals will be aired on ESPNU on Sunday. The women’s final will begin at 4 PM ET with the men’s following shortly after.

Boise State’s transfer Daniil Klimov came out hot in the opening round match, but was unable to hold the momentum in the first set. Montsi edged Klimov out to take the first set, but was not a factor in the second. Klimov blanked Montsi in the second and seemed to move into the third set with the upper hand. Klimov set the pace in the tiebreaker, but Montsi matched him — tying at 2-2, 3-3, and 4-4. After that, Montsi took control. On match point, Klimov smacked the ball into the net and ended his bid for the title. Montsi will face Andres Martin tomorrow at 9 AM ET.

NC State fifth year Anna Rogers had a slow start against Cal’s Haley Giavara, but dug her heels in to save the first set. Tensions were tight during the first set as the No. 6 seed battled her way back into the match and grabbed the first set. Riding her momentum into the second, Rogers put to rest any question of who would be moving on. Rogers is joined by her teammate and doubles partner Alana Smith in the next round. She will face Safiya Carrington at 9 AM ET tomorrow.

Fresh off a win at the ITA Cup, Luke Simkiss storms into the National Fall Championships and defeats Harvard’s Ronan Jachuck to move onto the Round of 16. Simkiss jumped out to an early lead to take the first set 6-3, but Jachuck answered with a 6-3 set of his own. In the third, it appeared that Simkiss would blank Jachuck pushing the score to 5-0 before Jachuck could get on the board. After surrendering two games to his opponent, Simkiss sealed the match at 6-2. In his first visit to the National Fall Championships, Simkiss moves on to meet No. 5 seed Eduardo Nava tomorrow in the Round of 16.

At the 2019 Oracle ITA National Fall Championships Megan Davies reached the semifinals. Today, junior Katherine Hui did everything she could to try to keep the Gamecock from repeating that performance. The blue-chip recruit blazed through the first set to put herself on top, but Davies was having none of that. The fiery senior answered with a 6-0 second set. Early in the third, the momentum swung between the two. Hui went up 2-1 before Davies answered with two games of her own. At 4-3, Davies took control of the match and closed the door on the junior. Davies will continue her quest for the title tomorrow against No. 4 seed Abbey Forbes.

Seven-seed Solymar Colling lives to see another day. The San Diego redshirt sophomore dropped the first set of her opening match to Missouri transfer Bronte Murgett. Colling didn’t make that mistake twice and roared back to take the second set without dropping a game. The third set was much more of a battle. Colling and Murgett traded leads throughout the set until Colling pulled ahead 5-4. Murgett’s confidence was clearly shaken as she hit multiple balls into the net or long. Colling punched her ticket to the Round of 16 when Murgett’s return went long.

Check out the rest of the matches from Opening Day!

Round of 32 Matches
- Advertisement -