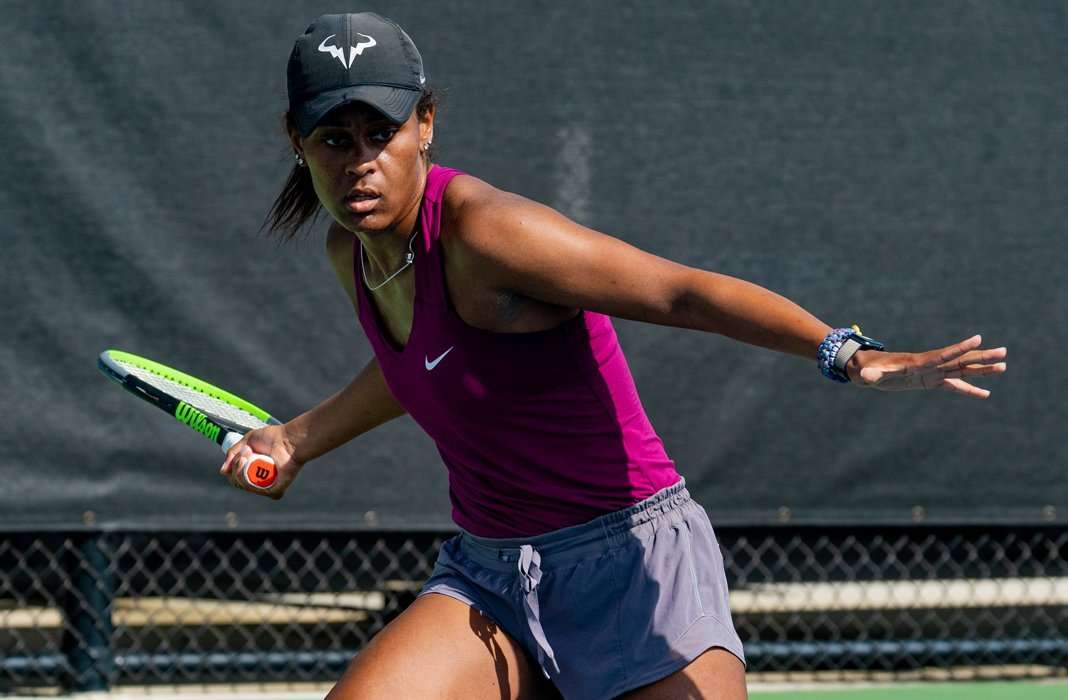 The USTA National Campus hosted a full slate of tennis on the second day of the Oracle ITA National Fall Championships. With the Round of 16 and quarterfinals over, only two seeded players remain in the men’s draw. Two UCF Knights will meet Minnesota incoming freshman Gavin Young and junior Michael Zheng in the semifinals. The top four seeds in the women’s draw moved on unscathed to the semifinals.

Play will resume tomorrow at 9 AM ET with semifinals scheduled for not before 1:30 PM ET. All matches will be streamed on PlaySight barring any technical issues.

The men’s and women’s finals will be aired on ESPNU on Sunday. The women’s final will begin at 4 PM ET with the men’s following shortly after.

In the first big upset of the day, Columbus State’s Alvaro Regalado blew past No. 1 seed James Trotter in two sets. Regalado was in control of this match from beginning to end. After taking the first set easily, Regalado cruised to a victory in the second. Midway through the second set, Trotter’s confidence dropped noticeably. Regaldo took the sixth game of the second set with a slam and went on to seal his victory in the next game. Overcome with emotion as Trotter’s ball went long, Regalado celebrated his second victory of the Oracle ITA National Fall Championships. In his first National Fall Championships appearance, the Cougar standout moved on to face junior Michael Zheng in the quarterfinals.

After downing Cal’s Haley Giavara with a 7-6 (3) tiebreak set yesterday, Anna Rogers fell to LSU’s Safiya Carrington in the same manner. In the first set, Carrington never let the six-seed take the lead, notching a solid 6-3 first set. Rogers – not one to go quietly – took the first game in the second set, but was soon playing catch up to Carrington. Rogers saved match point to push the second set to a tiebreak, but that was all she could muster. Carrington opened up a considerable lead and claimed victory as Rogers’ shot went into the net. Carrington’s victory earned her a place in the quarterfinals to compete against UNC standout and three-seed Alexa Graham.

The dream ended for ITA Cup champion Luke Simkiss. In a close three-set battle, he fell to Wake Forest’s Eduardo Nava. In the first set it looked as if Simkiss would continue his success from his opening round match. He started strong, but Nava closed the gap to force a tiebreak in the first. Nava didn’t have enough to take the first set, but he rode his momentum into an easy second set. In the third set Simkiss tried to stay close to Nava, but could not put together the shots. Up 5-4, Nava won on deuce point. He moved on to face Gavin Young in the quarterfinals.

In a rematch of the Oracle ITA National Summer Championship final, Colling closed the gap slightly, but the outcome was the same. Two-seed Failla defeated Colling with identical 6-3, 6-3 sets. Failla ran up the score quickly in the second set to 5-1, but Colling was not gonna go that easily. The seven-seed dug her heels in and added two more games before Failla wrapped the match. Failla has had a strong tournament up to this point. She has only dropped 13 games through the first three matches of the Oracle ITA National Fall Championships.

Eight-seed Trey Hilderbrand came up big against two-seed Kyle Seelig in the quarterfinals. The UCF Knight started off hot against Seelig in the first set, but the Buckeye slowly chipped away at his lead and eventually forced a tiebreak. The match only tightened after the first set. The second set had four ties with Seelig pushing ahead. Hilderbrand pulled even at 4-4 and went on to take the lead. Ultimately, Hilderbrand’s big serve was too much for Seelig. Throughout the tournament Hilderbrand has not dropped a set. He will face unseeded Gavin Young tomorrow in the semifinals.

Rebeka Stolmar was not going to make it easy on one-seed Ashley Lahey. After Lahey surged to a 4-1 lead in the first, Stolmar methodically erased the deficit. Stolmar won three unanswered games to even the score, but Lahey was able to edge the UCF senior out in the first. The second set was even tighter. Stolmar either held a lead over Lahey or was tied with her the entire set. In the tiebreak, Lahey forehand winner down the line to escape the close match and move onto the semifinals. Lahey has not dropped a set over the entire championship. She will face No. 3 seed Alexa Graham tomorrow in a rematch of the 2019 ITA All-American Championships final.

Check out the rest of the matches from the second day!