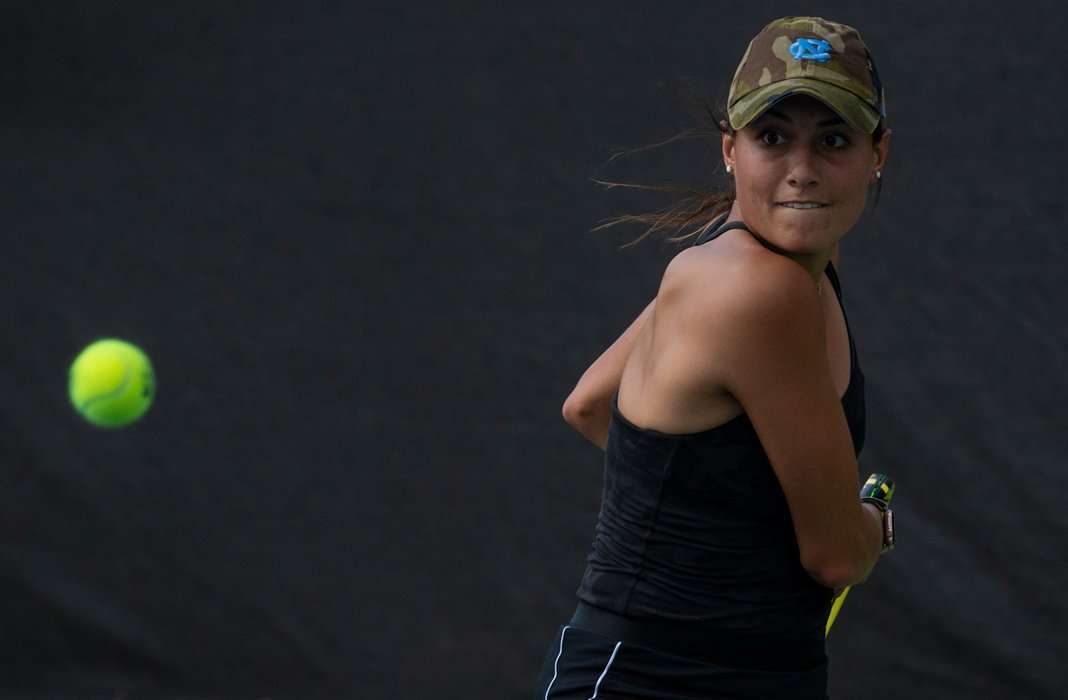 The semifinals of the Oracle ITA National Fall Championships were set to a backdrop of gusty winds and a scattering of rain showers.

The women took little time claiming their spots in the championship final. The No. 1 and 2 seeds – both Pepperdine athletes – went down in straight sets. The 4 PM ET women’s final will be decided between UCLA’s Forbes and UNC’s Graham.

The men’s final will be an all-UCF affair. For the first time in Oracle ITA National Fall Championship history, the men’s champion will be a UCF Knight. Tomorrow will be the first ITA singles championship appearance for both Decamps and Hilderbrand.

The finals will be aired on ESPNU starting with the women at 4 PM ET. The men’s match will follow closely after the completion of the women’s match.

Alexa Graham and Ashley Lahey have now met three times late in an ITA tournament — Lahey taking two and Graham one. Today, it was all Graham. No.1 seed Lahey had no answer for Graham as the Tar Heel quickly took the first set. It appeared Graham would blank Lahey, but late in the second set Lahey won a game to pull within three. The relief was clear on Lahey’s face, but it didn’t transfer into her winning any more games. Lahey came close to winning several games in the second set, but couldn’t finish. At match point, Lahey’s ball went long giving Graham the victory. Graham punched her ticket to her second ITA championship finals in as many years. She will be chasing her first ITA championship. With a victory tomorrow, UNC will have back-to-back Oracle ITA National Fall Championships titles.

Four-seed Abbey Forbes prevailed over two-seed Jessica Failla to move onto her first ITA championship final. Forbes wasted no time taking the first set over the Pepperdine fifth-year. Forbes continued to roll in the second set. Failla avoided being blanked and put up two games in the second. In the eighth game, Failla was serving to stay alive. Forbes claimed her spot in the championship match with a well placed shot to the corner. Forbes will match up against Alexa Graham tomorrow at 4 PM ET.

In the tightest semifinal matchup of the day, UCF’s Trey Hilderbrand came from behind in a three-set thriller to move onto the championship match tomorrow. Hilderbrand managed to stay close to Gavin Young throughout the first set, but Young held firm and took the first set on deuce point. In the second set, Young took the first game, but Hilderbrand slowly created a small lead. The set went to a tiebreak that trended in Young’s favor in the beginning. He jumped out to a 3-0 lead, but Hilderbrand slowly chipped away and eventually overtook him. In the third, Hilderbrand stretched the score to 5-2 where he had match point three times. Young stayed alive at deuce point and went on to save three more match points to draw within one game of Hilderbrand. Hilderbrand closed out the match in the next game and will meet his teammate Gabriel Decamps in the finals tomorrow. Tomorrow will be the first time that Hilderbrand has competed in an ITA championship match.

Gabriel Decamps had control of this match from beginning to end. The three-seed took the opening two games before Michael Zheng got on the board. From then on in the first set, it was all Decamps. Zheng stayed close to Decamps in the second set and even pulled even twice, but it wasn’t enough to slow down his opponent. Zheng saved two match points before Decamps claimed victory. Riding high on his victory, Decamps will face teammate Hilderbrand in his first ever Oracle ITA National Fall Championships final tomorrow.