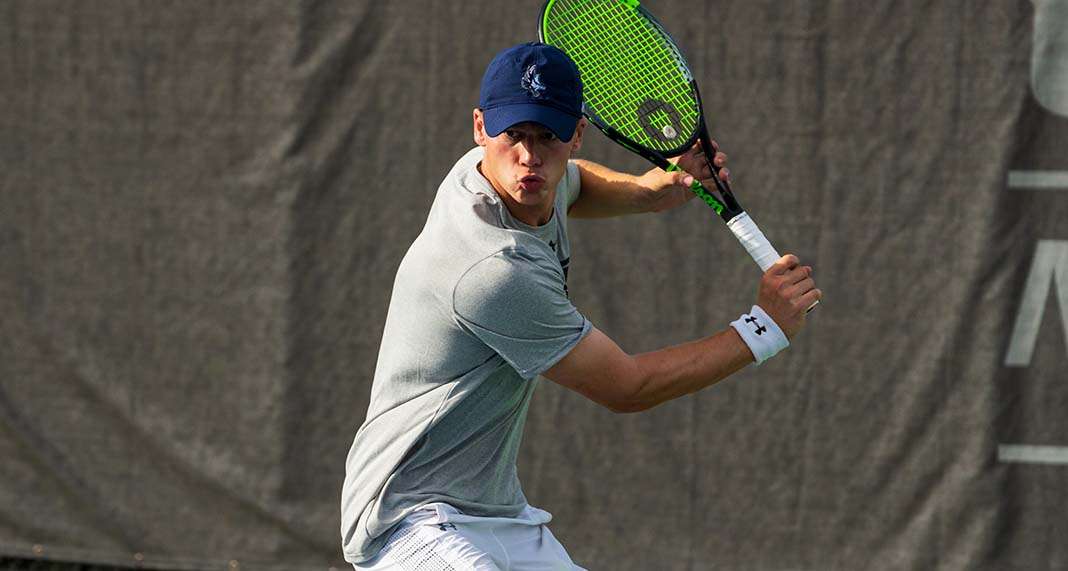 When Luke Simkiss finished at Tyler Junior College in Texas, Keiser Head Tennis Coach Dan Finn knew he wanted Simkiss to be a part of the Seahawks team.

“He kind of embodies everything you want in a player, so when I knew he was available I knew I just had to jump at the opportunity,” Finn said. “It is really refreshing how humble [Simkiss] is and for me it is just really one of the joys of coaching.”

Finn credits his relationship with the Tyler JC coaching staff and other JUCO coaches for putting Simkiss on his radar. Simkiss won two national championships with Tyler JC before transferring to Keiser.

“I really enjoyed my time at Tyler,” Simkiss said. “I feel I really grew as a player and matured as a person.”

Simkiss played in the Oracle ITA National Fall Championships last weekend making it to the second round before getting eliminated by the No. 5 seed in three sets. In the first round he went the distance against Ronan Jachuck of Harvard, who finished ranked No. 56 in the nation,  beating him 6-2 in the third.

“The first set was really close could have gone either way and then he kind of ran away with the second set,” Simkiss said. “The third set I went up 5-0 and then got a little tight, but was able to close it out.”

In the second round, Simkiss again went three sets — this time against Eduardo Nava of Wake Forest, ranked the 16th best college player in the country according to UTR. Despite his best efforts, Simkiss was unable to continue the magic and lost 4-6 in the third set.

“I went on the court believing I could compete with him,” Simkiss said. “At the end of the day you have to believe you can compete with anyone you go out and play…I just went out and kept going for my shots, but obviously it didn’t work out [this time].”

Before the Fall National Championships, Simkiss received an at-large bid for the 2020 ITA Cup after failing to qualify in regionals where he lost to one of his teammates. Losing to a teammate in regionals did not dampen Simkiss’ confidence going into the ITA Cup though.

“I thought ‘I am lucky to have an opportunity off my ranking to go and play this tournament,’ so I just worked hard to be in a good place mentally and physically,” Simkiss said. “I thought if I do the right things, I could win the tournament.”

And win the tournament he did.

At the ITA Cup, Simkiss had to overcome a bumpy start after losing the first set in the first round to Artem Vasheshnikov of Reinhardt University. Simkiss’ mental toughness kicked in and he was able to fight back into the match.

“I was really struggling and he was playing really well, serving big in the first set,” Simkiss said. “You can only control what you can control – luckily I was able to reset and play two good sets.”

After his first round, the junior only lost one more set en route to the finals. In the finals, he beat the No. 2 seed Valentino Caratini 6-2, 6-4. Right after Simkiss won the 2020 ITA Cup, the first thing he did was make sure that his teammates were with him for the pictures.

“He wanted the guys there with him because he said they sharpened him and helped him get ready for the tournament,” Finn said. “That’s one of those things as a coach that you are just so proud to see – someone so grateful.”

Simkiss was also named the James O’Hara Sargent Sportsmanship Award winner for the tournament in recognition of his humility and maturity on the court.

“To be given an award not necessarily based on your level of tennis, but on people judging you [and your character] means more than winning in a way,” Simkiss said.

Simkiss is picking up where he left off last spring in team competition. He went 14-0 at the No. 1 singles spot and was ranked No. 6 in the NAIA rankings before the season was halted by the pandemic. At the end of the spring, Simkiss was named the ITA National Player to Watch. Part of Simkiss’ success comes from his mindset going into matches.

“I think every match and every tournament is as important as last,” Simkiss said. “Every match played plays a huge part in our overall game and success.”

For as great as Simkiss has been playing, he knows that college tennis is a team sport and has complete confidence in his teammates as the Seahawks ultimately have one goal this year.

“We have a lot of great players – players who are hungry and motivated to achieve the same things,” Simkiss said. “Obviously, the goal is nationals, but there is a long road to get there.”

Simkiss is the type of player that coaches dream about getting on their tennis team – not just because of his tennis skills, but also his personality and grit.

“He is the best overall player I have ever coached,” Finn said. “He is a humble, hard-working young man and he is going to be successful in anything he does in life.”