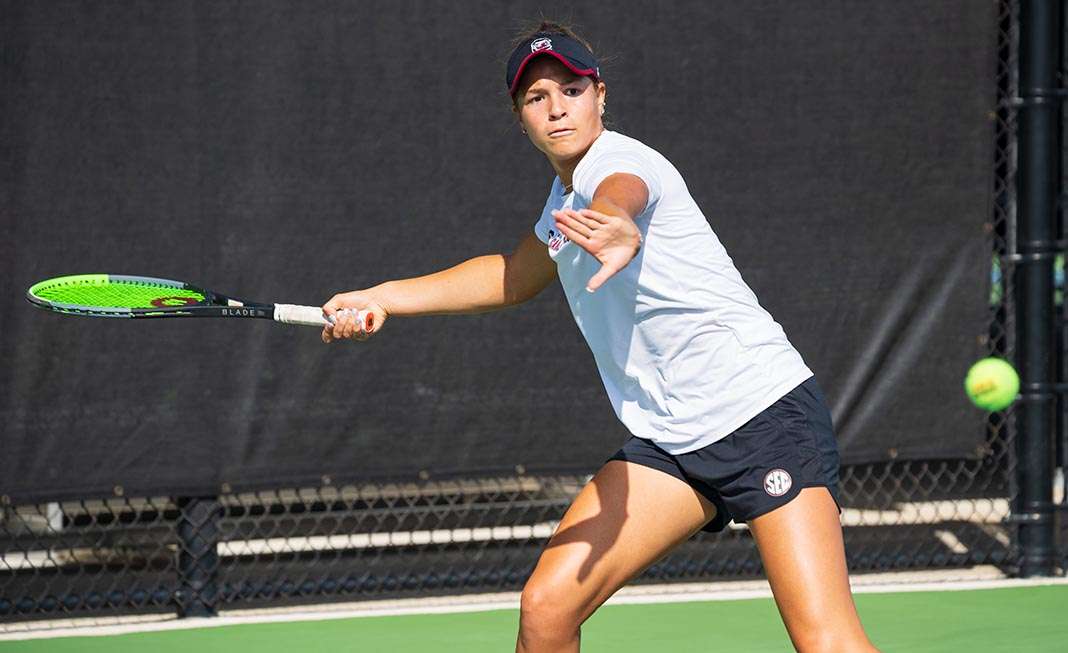 With the ITA Tour: Fall Circuit by UTR winding down, players took advantage of the 10 tournaments that spanned the country this past weekend.

Collegiate players used the Circuit to sneak in a little more competition before the holiday break begins — and many of them walked away with tournament titles. Fall Circuit events are open tournaments — anyone from college student-athletes to juniors to even collegiate coaches can compete and win.

Week Nine of the Fall Circuit had a lot going on. Lucky for you, we’ve picked out the top five takeaways.

Takeaway 1: Keepin’ it in the Family at Drake Fall Circuit Event

In an ITA Tour: Fall Circuit by UTR first, the Drake University Fall Circuit tournament was swept by a husband and wife pair. Drake Assistant Men’s Coach Ben Lott and Drake Assistant Women’s Coach Kristina Lott walked away with the weekend’s titles. Ben played for the Bulldogs for four years from 2012-2016. He has been an assistant coach for the men’s program since 2018. Kristina played at UC Irvine from 2009-2013. She played professionally before working as an assistant coach at Santa Clara and then Drake. Kristina has been with Drake’s women’s program since 2019.

Out of the 32 collegiate men that competed in Tuscaloosa this past weekend, 14 were either part of the Alabama or Penn State programs. The field also featured student-athletes from Memphis, Delta State, West Alabama, Auburn at Montgomery, Alabama – Huntsville, South Alabama, at Birmingham, East Central Community College, Itawamba Community College, and Meridian Community College. The men’s draw came down to a three-set battle between Alabama’s Zhe Zhou and Memphis’ Oscar Cutting. Before the finals, Cutting won two third-set tiebreaks. In contrast, Zhou did not drop a set until the finals match. The Bama grad student outlasted Cutting to win his first Fall Circuit title.

On the women’s side of the draw, 12 of the 18 competitors were collegiate women. North Alabama and Alabama at Birmingham each had three student-athletes competing at the tournament. They were joined by players from Alabama, Memphis, Jacksonville State, West Alabama, and East Central Community College. Memphis freshman Sophie Abrams secured a spot in the finals alongside West Alabama’s Haina Franco. Like the men’s final, the two battled for the title into a third-set tiebreak. For Franco, that was par for the course — all four of her matches over the weekend went to a third set. Franco started strong against Abrams and took the first set, but the young Memphis player showed her resilience and battled back to take the final two sets. This weekend’s tournament was the first Fall Circuit event that Abrams competed in.

If you sifted through the athletes at the Gorin Tennis Academy Fall Circuit event this weekend, you would find among the entrants a talented contingent from the University of Washington men’s team and pro Ronald Slobodchikov — both played a huge role in the tournament. Hailing from Russia, Slobodchikov is currently ranked No. 405 in the world in singles. Slobodchikov won his first four matches of the tournament without dropping a set and only 16 games. He punched his trip to the finals after downing Washington freshman Han-chih Lin. Slobodchikov hurt his wrist in the semifinals against Lin and was forced to withdraw from his finals match against Washington’s Clement Chidekh. This weekend’s Fall Circuit title is Chidekh’s second ITA Tour: Fall Circuit by UTR crown. He previously won the Week Five Gorin Tennis Academy tournament.

After a disappointing first-round loss at the Oracle ITA National Fall Championships the previous weekend, Emma Shelton came out guns blazing at the Topspin Swim & Racquet Club Fall Circuit tournament this weekend. The sophomore standout blanked her first two opponents to open up the tournament. Shelton was not fazed by the competition until the semifinals when she faced Furman’s Julia Adams. Adams snatched the second set from Shelton to force a third-set tiebreaker. Despite putting up a good fight in the third, Adams was unable to punch her ticket to the finals. Shelton faced fellow South Carolina sophomore Elise Mills in the finals. In the intra-squad matchup, Shelton proved to be the better woman on Monday morning. She handily defeated Mills 6-2, 6-1. This weekend’s Fall Circuit event was the first tournament of the Circuit that Shelton competed in.

With school and the fall season winding down, collegiate players took advantage of the second to last week of the ITA Tour: Fall Circuit by UTR. Out of the 19 titles won this weekend, 9 were claimed by current collegiate players. Division I student-athletes took home the majority of the collegiate-claimed titles with seven, while Jorge Santamaria, Palm Beach Atlantic, and Guillaume Tattevin, Lander University, repped Division II tennis. Male collegiate players saw more success this weekend than women players. South Carolina’s Emma Shelton and Memphis’ Sophie Abrams represented for the women and won their respective tournaments.

Check out the rest of this weekend’s action below!