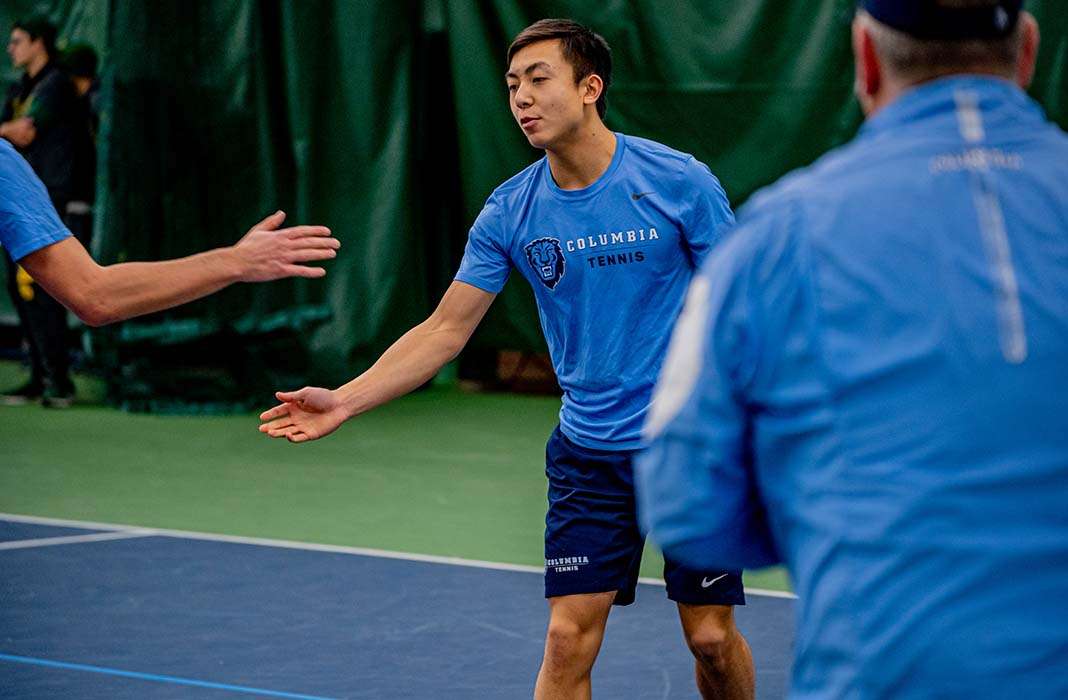 The Brown Bears hired Alex Kasarov as their head coach in September after Head Coach Tim Gray retired. Kasarov comes to the Bears after serving two years as the Associate Head Coach of his alma mater Wisconsin. The Bears have become a family affair this year with freshman Chun Lam joining his older brother Ching, a senior with the highest UTR on the team. Other key returners for Brown are Roger Chou and Theodore Van Eck who played No. 3 and 4 singles respectively last season. Last season, all 11 members of the team were ITA All-Academic Scholars and the team was recognized as an ITA All Academic Team.

Follow Brown to see where your UTR stacks up!

The Yale Bulldogs are under first year Head Coach Chris Drake, who spent the eight previous years as the Head Coach for rival Ivy League school Dartmouth. The Bulldogs are hoping that Drake will lead Yale to their first winning season since 2017. The team is led by junior Michael Sun (12.56 UTR) and senior Cody Lin (12.29 UTR) alongside Freshman Theodore Dean (12.47 UTR). Eight players earned 2020 ITA Scholar Athlete recognition, while Yale was selected as an All-Academic Team.

Follow Yale to see where your UTR stacks up!

The Dartmouth Big Green are lead by second year coach Xander Centenari. Last season during the shortened season Dartmouth went 9-3 and were ranked as high as No. 25 in the nation. Dartmouth placed six on the ITA All Scholar Team. Dartmouth lost two of its top players from last year, Charlie Broom who won the ITA Northeast Regional singles title last year and his doubles partner David Horneffer. If the Ivy League does have a spring season this year Dartmouth will rely on seniors Dan Martin (UTR 13.16) and Peter Conklin (UTR 12.69).

Follow Dartmouth to see where your UTR stacks up!

The Quakers are led by Head Coach David Geatz who is in his 9th season. Despite a shortened season last spring, junior Kevin Zhu rose to No. 88 in the country and to the semifinals of the ITA Northeast Regionals. Another standout is junior Edoardo Graziani who has the highest UTR on the team at 13.11. Graziani’s best result last year was when he defeated No. 57 Aditya Vashistha of St. John’s – his first win over a ranked opponent. Arguably Penn’s best season in the last 15 years was in 2019 when they won the ECAC Championships beating Dartmouth, Harvard and Cornell. They also reached a program best No. 23 in the nation that year.

Follow Penn to see where your UTR stacks up!

The Cornell Big Red are lead by 8th year Head Coach Silviu Tanasoiu. In 2017 Tanasoiu led the Big Red to their best season in program history, winning an Ivy League Championship, an at large bid to the NCAA Championships, and their first NCAA tournament win. Tanasoiu also was named the Ivy League Coach of the Year that season. In last year’s shortened season, Dartmouth went 9-2 with their only losses coming to Power 5 schools Michigan and Iowa. The Big Red also won the ECAC Championship in 2020 beating Harvard 4-1. Cornell currently has three seniors with with UTRs about 13, they include Eero Vasa, Evan Bynoe and Alafia Ayeni.

Follow Cornell to see where your UTR stacks up!

The Princeton Tigers went 14-4 last season with big wins over Marquette, Old Dominion and Penn and close loses to Clemson, Harvard and Ole Miss. They were ranked No. 18 in the ITA national rankings in March while Karl Poling and Ryan Seggerman were ranked No. 113 and No. 124 in the nation for singles respectively. Seggerman and doubles partner Payton Holden were also ranked No. 4 in the nation for doubles. The team was honored as an ITA All-Academic Team and had 8 individuals players named ITA Scholar Athletes. Tigers Head Coach Billy Pate is in his 8th season with Princeton and his 29th season as a head coach. He is considered one of the most highly respected coaches in the nation.

Follow Princeton to see where your UTR stacks up!

The Harvard Crimson were ranked as high as No. 11 last spring before the pandemic halted play — their highest ranking since 1998. They were 11-1 and undefeated in dual matches at home — their only loss was to Cornell in the ECAC Championship. Harvard is led by sophomore Ronan Jachuck who was ranked No. 68 in singles at the end of last season. The Crimson also had eight players from their spring season named ITA Scholar Athletes. Harvard bolstered their already talented line up this year by adding three freshman, Daniel Milavsky (Needham, Mass), David Lins (Boca Raton, FL), and Niels Korsgaard (Middelfart, Denmark). Andrew Rueb is in his third season as head coach of The Harvard Crimson. Before taking over the helm, Rueb was an assistant coach at Harvard for 11 seasons in which he was twice named ITA Northeast Assistant Coach of the Year.

Follow Harvard to see where your UTR stacks up!

The Columbia Lions are lead by Head Coach Howard Endelman, who is in his second season as the Head Coach. Endelman had previously served as the associate men’s coach (2010-2019) and head women’s coach (1989-92) at Columbia, as well as played there in the mid-eighties. Columbia men’s tennis has won six straight Ivy League titles and reached the Sweet 16 in each of the last NCAA Tournaments. The Lions played a slew of ranked teams last spring, going 7-3 and notching wins against No. 12 Baylor and No. 14 South Carolina. They also almost came all the way back from a three point deficit against Northwestern before falling 3-4. The Lions also won the 2020 NCAA Academic Progress Rate Award earning a perfect score. The Lions represent the only Division I men’s tennis program to earn the award in all 15 years of the program’s existence. Columbia is led by Senior Jack Lin who was ranked No. 22 in the nation last is year before the season was halted.

Follow Columbia to see where your UTR stacks up!

Interested in learning more about the teams in the Ivy League? Check out our Division I Men Teams page to connect with them on social media and learn more!