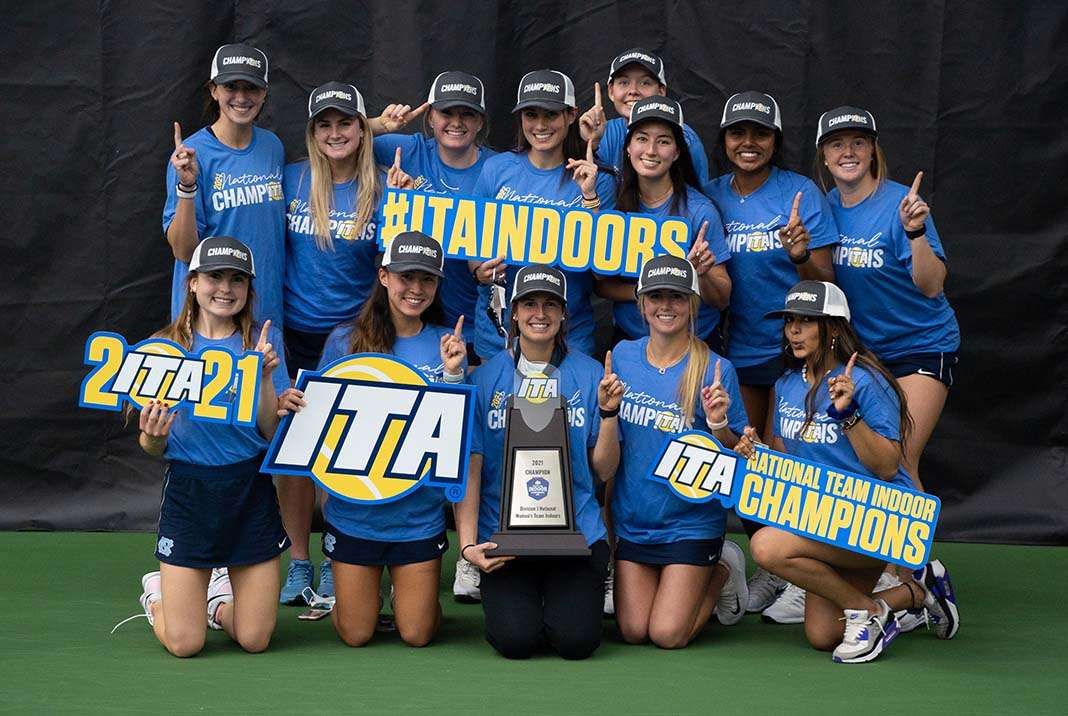 The North Carolina Tar Heels become the first team to win back-to-back Indoors championships since Northwestern in 2010. Coach Kalbas’ experienced program pulled out the win over the young, talented Texas Longhorns in a 4-3 nail-biter. The Longhorns started strong in their second ITA Division I Women’s National Team Indoor Championships finals appearance, but the Heels surged late to wrestle the win away.

The Texas Longhorns came out loose and ready to fight in doubles — and the results show it. The Horns quickly ran up the score on the Tar Heels. All three Texas doubles duos started up 2-0 over the the Heels. Fresh off of yesterday’s 6-4 upset of the No. 1 doubles team in the country, Lulu Sun and Kylie Collins added another top five ranked win to their resumes. In commanding fashion, Sun and Collins defeated No. 3 Graham/Daavettila 6-2. On court three, Chavatipon and Stearns sealed the doubles point with a 6-2 win of their own. Turati and Labrana were also up on Scotty and Morra at the time the doubles point was clinched.

The Longhorns carried their momentum from doubles into singles — Texas took four of the six first sets. North Carolina’s senior leaders Graham and Daavettila held strong for the Heels and put Horns freshmen Sun and Stearns on the ropes. After lineup changes from both the Heels and the Longhorns, Sun faced Alexa Graham. The ITA Singles All-American flexed her muscle and defeated Sun in straight sets to put her team on the board. Senior Sara Daavettila finished freshman Stearns in straight sets and in the process slowly started the shift of momentum from Texas to UNC.

Daavettila’s win brought the match score to two-all. The Horns were closing in wins on courts three, four, and six — Carolina had other plans though. Texas veteran Turati hung tough and withstood a late push from Cameron Morra to put the Longhorns ahead 3-2. On court four, Elizabeth Scotty slowly worked away at Chavatipon’s lead and forced a third-set after winning the tiebreak.

Next to Scotty on court six, Crawley was working on her own comeback in the third set. Down 1-4, the Tar Heel freshman chipped away at the lead and eventually won 3-6, 6-1, 6-4.

The match was left in the hands of sophomore Elizabeth Scotty. Chavatipon started the third set hot and went up 2-0, but that was all she would do from there. As Chavatipon’s return soared past the baseline, the Carolina program erupted in cheers and enveloped Scotty in hugs.

With the win the Tar Heels move into third place for the most Indoor championships following Florida (7) and Stanford (10). The Heels have made the finals of the National Team Indoor Championships for the past seven seasons with nine appearances overall.