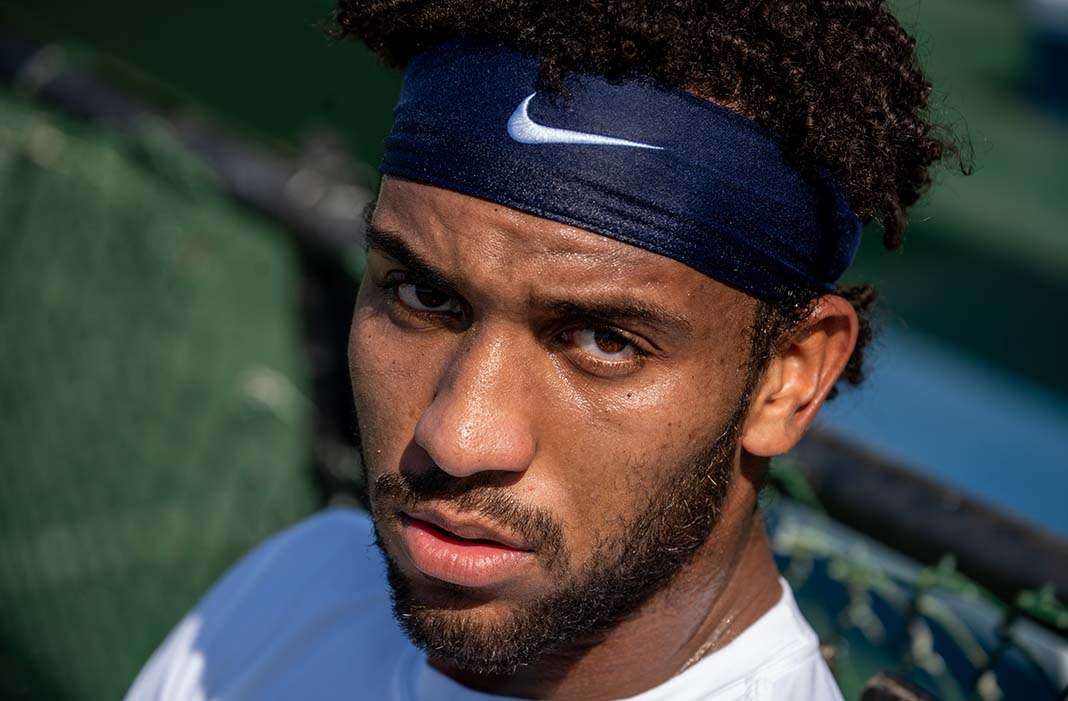 Throughout the month of February, the ITA is highlighting some of the Black student-athletes, coaches, officials and administrators that make up college tennis.

Michigan junior Andrew Fenty has already established himself as one of the top student-athletes in Division I Men’s tennis. Currently, he is ranked No. 14 in the nation in singles and No. 2 in doubles with partner Mattias Siimar. During his first two years of college tennis, Fenty was named the ITA Rookie of the Year and an ITA All-American in singles and doubles.

The 2020 Big Ten Player of the Year is not done yet, though. He has big plans for the rest of his time at Michigan and for his professional career. The desire to make a name for himself stems from various influences — from his family to Francis Tiafoe to past Michigan legends.

ITA | You come from an athletic family – mainly runners – why did you choose tennis?

I grew up playing numerous sports such as basketball, baseball, football, and tennis, but it just so happened that I was the best at tennis. At age 12, I decided that tennis would be the only sport that I would play. My father had a high school friend who coached at the tennis center that currently hosts the Citi Open, so he just thought it would be a good idea to put me in tennis. The Citi Open is three minutes from my house so it didn’t hurt to sign me up.

ITA | You have a twin brother playing at Trinity College – did that have any affect on your desire to succeed and stand out from the pack?

From a young age, my brother and I were very competitive. We would fight all the time when we were young. He has a big part in where I am today. My brother is the first person to text me after I play any match and, if it were up to him, he would be at all my matches. I wouldn’t be here without him.

ITA | You trained at the JTCC as a junior. How did training alongside athletes like Francis Tiafoe influence your desire to make a name for yourself in tennis?

Training at JTCC was one of the best things to happen to me. Training at JTCC, I was surrounded by the best of the best at a young age. It was easy to be guided in the right direction. When you have people like Denis Kudla, Frances Tiafoe, and Mitchell Frank playing right beside you, it’s hard not to be. I met Frances when I was 7 years old, he was 9. At the time, we were kids who just loved tennis and had no idea what would happen. Once Frances started to make a name for himself, such as winning Les Petite As and becoming one of the best ITF juniors in the world, I knew I wanted the same. I also knew that, since he could do it, I could also. For years JTCC has been producing the best talent. Frances pushed me and continues to push me to become the player I am today and the player I want to be in a couple of years. He’s like a big brother to me. Without Frances and without Denis Kudla before him, I wouldn’t be here today.

ITA | What was your pathway to college like? Did you face any challenges as a Black student-athlete?

As an African American looking to play in college tennis, there weren’t too many top collegiate players in the last couple of years. The only challenge I faced was not seeing many other African Americans at the top of college tennis. This is something that needs to be presented at a young age so that kids can go through this pathway to get an education, play for great universities, and then pursue a professional career.

ITA | What drew you to Michigan?

What drew me to Michigan was the combination of great athletics and academics. When you look at the athletics at Michigan every team is great, every sport is great, and every team expects greatness. Being a part of something and leaving a legacy is something that I wanted to do. Before coming to Michigan, the 2017-18 year was one of the best years in a long time and I wanted to make sure that was the standard for Michigan. I believe that our coaching staff at Michigan is the best in the country. With the experience of both coaches Adam Steinberg and Benjamin Becker, I was destined to get better.

ITA | What are your goals for your final two years of college?

In these final two years of college, we’re going for it all. We want to win a national championship here at Michigan and I believe that we can. As an individual player, I would love to establish myself as one of the best college tennis players in the country and make a run at the NCAA individual title.

ITA | What is your end goal for tennis, post-college?

Post-college I will pursue my professional career and do what I’ve always dreamed of which is being a professional tennis player.

ITA | Do you think there is any added pressure to succeed and in return represent Black tennis players?

ITA | What do you think are some of the reasons why we don’t see more Black tennis players in college tennis?

The lack of African Americans in college tennis is due to the lack of awareness of college tennis. Sports like football and basketball are promoted and played on national television. Every game they play is televised. The only thing that is televised for college tennis is the NCAA finals and individual finals. When a young African American kid turns on the TV and sees people that look like him on the football field and basketball court, kids will probably lean towards that sport just off of the fact that someone like them has done it before. How could a young African American see someone like him playing if he’s never on TV or being promoted? While there is a lot to do in this matter, it has been getting better seeing players like Frances Tiafoe, Michael Mmoh, Coco Gauff, and Naomi Osaka, which is very promising for young African American kids.

ITA | Representation is important. Do you think you playing and succeeding at a top program like Michigan will open more doors for Black players?

Yes, if I’m able to succeed it will open more doors because kids will see that the route of playing at a university can help you become a professional tennis player for not only African Americans but everyone. Succeeding for Michigan will show just how great a program like Michigan really is. In the past years, Michigan has had great players like Malivai Washington, Jason Jung, and Evan King who became successful on the ATP tour and it would be an honor to be a part of that list as an African American and Michigan tennis player. If young boys and girls see me succeed, then they will want to follow.

ITA | You’ve had success so far in your career – ITA Freshman of the Year, ITA All-American, currently ranked No. 14 – how would you like to be remembered for your time playing college tennis?

My Michigan tennis career has already been special and I’ve only had one and a half seasons. I’ve brought a lot of achievements and accolades back to Michigan that has been missing for some time. However, when I think about what I’ve done, I always think more. I have a lot more to accomplish individually and as a team for me to feel successful as a college tennis player. I have a lot more to accomplish to become the professional tennis player I want to be one day. I want to be remembered as one of the best Michigan tennis players ever. Someone who looks back in years to come and left a legacy.