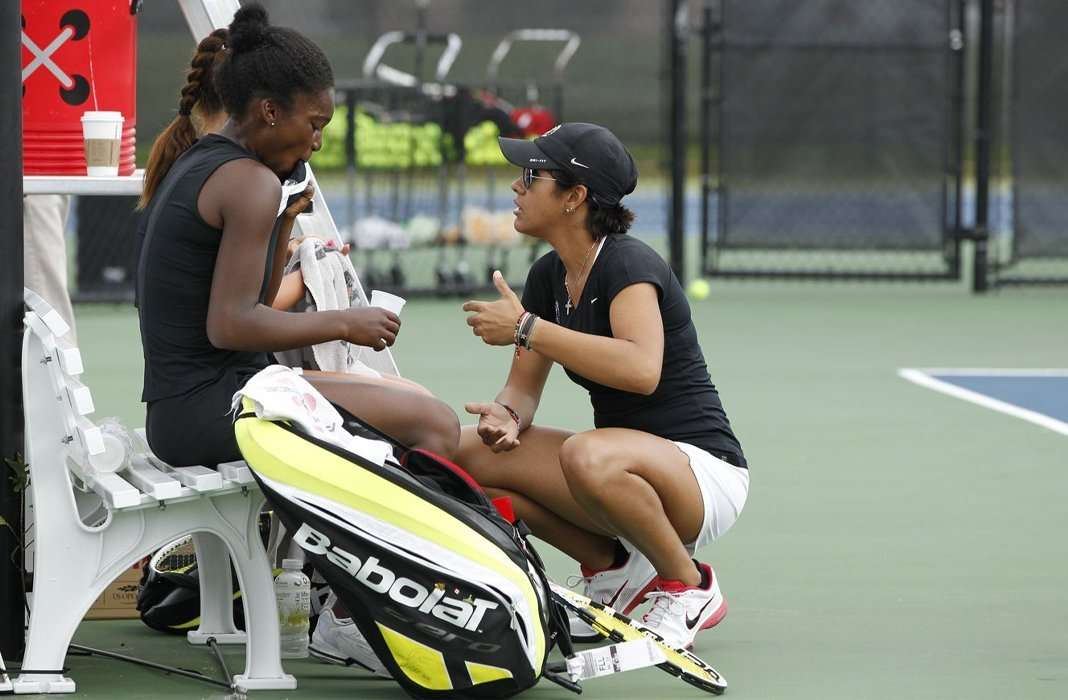 This story is brought to you by Maria Lopez courtesy of Outsports.com

I played those words over and over in my head as I realized I needed to speak up, be vulnerable and let people in.

I found myself questioning who I was while the world was going through uncertainty, pain, changes and separation. I wanted to speak up about subjects that mattered, but how could I do that, while hiding my authentic self. I was holding on to the pain, shame, fear and embarrassment, and covering who I truly was.

“That pain was familiar.

In my junior year of college at Barry University in South Florida, our team made it to the finals of the NCAA Division II National Championship for the first time in school history. I was a two-time All-American my first two years and was en route to continued success as an upperclassman.

However, things did not really turn out that way. I struggled to win matches, confidence was at an ultimate low, and it was apparent that I was letting my team down while we had a real chance to compete for our first national championship.

During the finals, the coaches decided to take me out of the lineup in the most important match I could have ever played in college. I don’t blame them. I know they made the best decision for the team. But it left me with a big sense of regret and guilt for letting them and my teammates down.

The truth is, I was lost, without a sense of identity or belonging. I found myself questioning my choices, who I was and why I was all of a sudden attracted to women. I avoided friends and teammates and hard conversations. I said no to gatherings and isolated myself from reality. I parted ways from the sport that I love. I had mentally checked out, and pushed away the support from the people who had become my family. I look back at that year and I can feel the pain of hiding who I was, and who I was actually becoming.

Coaching was not something I pictured myself doing or dreamed about as a kid. Tennis was my life — I was obsessed about it. When my college career and dream of playing professional tennis was over I wanted to pack those dreams up and hang up the rackets for good.

That did not last long, and six months later I found myself back on the tennis court, trying to figure out what I was meant to do with my life. I landed my first coaching job working at a tennis academy; humbling, uncomfortable and oftentimes frustrating. I spent the next five years learning, being mentored and pouring my heart into my newfound passion, while I was learning to work with different age groups and skill levels. But I had some unfinished business to come back to.

I went back to the place where I discovered who I was meant to be. I volunteered for my alma mater, and in my first year as an assistant coach in 2011, Barry University won our first national championship. There was not a moment I did not think about what I thought I should have accomplished with my teammates back in 2003. I had to learn to let go of the pain to be able to turn it into love.

I realized there was nothing I wanted to do but to use coaching to inspire, challenge and empower others. To help guide them to learn and discover life skills and values that will let them have an experience they can look back to and have no regrets.

Championship rings have a price tag based on hard work, sweat, sacrifices and a bit of luck. The value of helping young women understand and believe in how powerful, strong, smart, and resilient they are — on and off the court despite all of our differences — is priceless.

I went on to spend the next decade coaching at a few universities. I kept growing as a person and as a coach, but there was something chasing me, always making me feel uncomfortable in my own skin. This feeling of hiding who I was because of the fear of who I thought others wanted me to be, and being exposed to others who would judge me for everything but my ability to coach.

I had chosen to share my sexuality with a few people who made me feel comfortable and safe. I convinced myself that was enough. But this past year the world challenged us to see things with different lenses. The fight for inclusion was bigger than me — it was time to be a team player for those who did not yet have a voice.