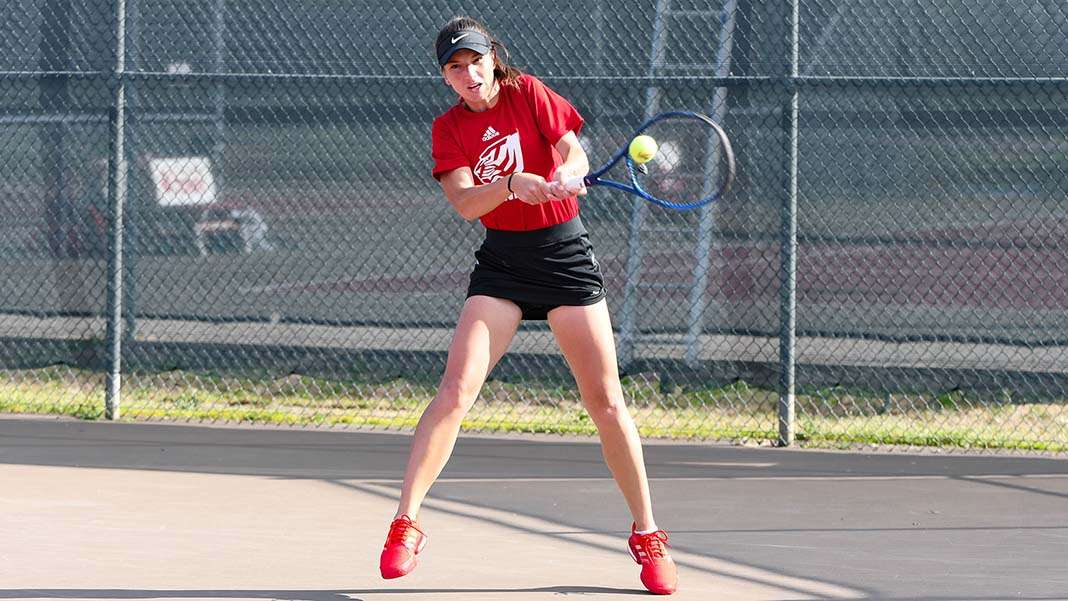 With all five divisions in college tennis back to competing, the UTR ITA Player of the Week awards were given out to 10 student-athletes – five men and five women – this week to celebrate their success. All of the recipients had an outstanding week of play and shined for their respective teams. Their success was reflected in the change in their UTR — which was as large as a 0.81 point increase.

Florida senior Josh Goodger continued his pattern of domination at the bottom of the Gators’ lineup with two straight-set wins this week. On St. Patrick’s Day, Goodger slipped past TCU’s Fearnley (then No. 125)  in straight sets. He was the second Gator to win his singles match – only finishing after Riffice on court two. Goodger rounded out his week by downing Florida State’s No. 5 Le Seguillon. He posted identical 6-3 sets against his opponent. The two wins bring Goodger’s streak to eight straight in dual match play and 14 overall.

James Madison RS sophomore Natalia Nikolopoulou helped the Dukes to two sweeps last week. First, Nikolopoulou was critical in JMU’s sweep of George Washington. Along with her partner Voloh, Nikolopoulou clinched the doubles point for the Dukes with a 6-2 victory. She then extended her team’s lead to 2-0 after defeating Vesikallio in straight sets. In JMU’s match with William and Mary, Nikolopoulou again won both her singles and doubles match. She edged out Okuyama in a three-set battle to put the Dukes up 6-0.

The Columbus State men’s program is full of talent and freshman Felix Steen is no exception. He went undefeated in singles and doubles during the Cougars’ doubleheader with Southwest Baptist and Montevallo. Steen started Saturday by clinching the match for CSU over the Bearcats. Playing at No. 5 singles, Steen defeated Sanoja in straight sets. He then followed up that victory by blanking Montevallo’s Ludlage. The freshman has not lost a singles match all season.

West Alabama grad student Daryna Hukasian finished this week with an undefeated record in singles and doubles. Hukasian was one of two Tigers to win a singles match against No. 1 Indy last week. Playing at No. 4 singles, she defeated Lagoda in straight sets and only gave up four games total. Hukasian and partner Vidnere also blanked Indy’s Solynshkina/Sharonova. Following up her strong performance against Indy, Hukasian recorded another straight-set singles victory – this time over Southwest Baptist’s Pascual.

North Carolina Wesleyan junior Jhonny Acosta went 4-0 across singles and doubles this week. Against Mary Washington, Acosta dropped two total games between singles and doubles. Playing at No. 3 singles, he took the first set 6-1 over Rishi Charan Shankar and then blanked him in the second. On Monday against Belmont Abbey, Acosta kept his winning ways alive. He defeated Fassioli in straight sets. The victories bring his win streak to six straight.

Sweet Briar sophomore Ruth de Souza had a dominating week of play. Across three dual matches, she went undefeated in singles and doubles play. In singles play, de Souza only allowed one game total to her opponents. Her two shutouts came against Ferrum’s Wright and Randolph’s Elkhansa. Her closest singles match of the week was against Methodist’s Caddick — she won 6-0, 6-1. In doubles, de Souza and partner Wandling only allowed two games total and recorded two shutouts as well.

Bethel freshman Tomas Quercia swept his singles and doubles matches this week. First, against Doane Quercia was tested by Sam Coy. After easily taking the first set, Quercia dropped the second forcing a tiebreak. Quercia was able to comfortably shutout Coy for the win. The freshman followed up his three-setter with a straight-set victory over Christian Martin of Friends. Earlier in the match with Friends, Quercia and partner Shima clinched the doubles point with a 6-4 victory.

Lindsey Wilson sophomore Alexandra Parra went 5-0 over the past week in singles and doubles play for the Blue Raiders. Against Martin Methodist, Parra and partner Mora clinched the doubles point for their team to put them up a point. Parra continued his success in doubles into her matches with Bethel and Freed-Hardeman winning 6-0 and 6-1, respectively. In singles, Parra posted straight-set victories against Bethel and Freed-Hardeman – only allowing four games total across the two matches. Her singles win streak now sits at six straight.

Seward County sophomore Juan Gonzalez had a winning week for the Saints. He was undefeated in singles and doubles against Jacksonville College and Cameron University. Against the Jaguars, Gonzalez and partner Castillo-Martinez helped clinch the doubles point with an 8-2 victory. On Saturday, he also won his doubles match against Cameron. In singles, he defeated Jacksonville’s Hamman and Cameron’s Duleba – both falling to Gonzalez 6-3, 6-3.

Tyler Junior College freshman Violet Apisah continued to make an impact for the Apaches at No. 3 singles. This week she went 7-0 across singles and doubles play. Apisah only allowed eight games total to all three of her singles opponents. The closest match was against Northeastern State’s Carnelutti — Apisah won 6-2, 6-3. Playing at No. 2 doubles with Schwarte, Apisah recorded two shutouts.