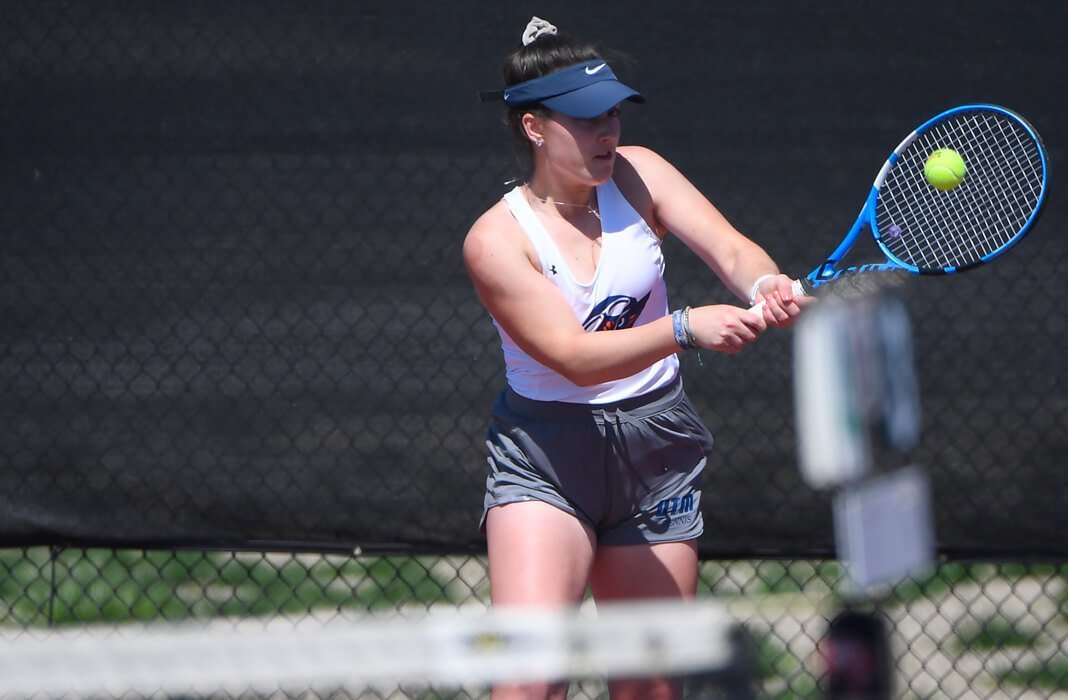 With all five divisions in college tennis back to competing, the UTR ITA Player of the Week awards were given out to 10 student-athletes – five men and five women – this week to celebrate their success. All of the recipients had an outstanding week of play and shined for their respective teams. Their success was reflected in the change in their UTR — which was as large as a 0.60 increase.

UCLA senior Keegan Smith powered through a tough batch of opponents this week. First against San Diego, Smith and partner Pereira clinched the doubles point for the Bruins with a solid win over No. 61 Holmgren/Norfeldt. Smith and Pereira are currently ranked No. 75 in the Oracle ITA Doubles Rankings themselves. They added another doubles win on Friday against Stanford’s No. 1 duo of Geller and Rajesh. Smith faced Geller again in singles – blanking him in the first set and allowing only two games in the second. No. 48 Smith also downed No. 30 Holmgren in straight sets. His singles win streak sits at four straight.

UT Martin sophomore Jillian Niedzialowski rose to the occasion on Senior Day for the Skyhawks. Playing at No. 2 doubles, Niedzialowski and her partner Ondo Cerezo set the tone for the match. They battled past Jacksonville State’s Hamilton and Jamal to win 6-3. In singles, Niedzialowski pushed the Skyhawks to the edge of victory with her straight-set win over Kaya. The UT Martin sophomore showed grit and outlasted Kaya in a first-set tiebreak to speed her team to victory.

UTPB senior Aditya Iyer shined for the Falcons this week in matches against UT Tyler and Western New Mexico. Iyer was the only Falcon to win a singles match against the talented UT Tyler program. He faced the Patriots’ No. 2 guy Marquadt. Iyer dropped the first set against Marquadt, but rallied back to win in the third-set tiebreak. Earlier in the match, Iyer and his partner Schwieger defeated Marquadt/Apple in doubles. They were the only UTPB doubles team to win their match. Two days later against Western New Mexico, Iyer and Schwieger downed Vega/Delfino to help the Falcons secure the doubles point. The senior wrapped up the week with a straight set win over WNMU’s No. 1 player.

Mercyhurst’s Valentine Budin was tested this week in singles play, but she emerged victorious. Two of her three matches went to the third set after she dropped the opening sets, but the freshman finished the week undefeated. In Mercyhurst’s match against Millersville, Budin moved up to play at No. 3 singles for the first time. She faced Millersville’s Noelle Htwar. After dropping the first set, Budin came back with a strong second and blanked Htwar in the third. In her third match of the week, Budin once again played at No. 3 singles. This time she downed West Chester’s Roelker in straight sets — 6-1, 6-1. In doubles play, Budin and her partner Theodora swept all three of their opponents bringing their record to 8-1 on the season.

WashU’s Scott Altmeyer continued to be a steady force for the Bears in their matches against Lindenwood and Principia. Playing at No. 2 singles, Altmeyer continued his dominance and did not drop a set this week. Lindenwood’s Horcajada pushed Altmeyer to the edge in the second set of their match, but was unable to force a third set. Altmeyer is 7-0 during the dual match season. In doubles play, Altmeyer paired with two different doubles partners and won both matches. Against Lindenwood, he won 8-4 with first year Ouyang. Against Principia, Altmeyer defeated Gomez/Dale 8-2 with WashU senior Hillis. Altmeyer has paired with three different Bears in doubles this season and he has won all seven of his matches.

Methodist’s Valeria Matute clinched both matches this week for the Monarchs. First against Meredith College, Matute blanked Gillies. The victory was her second shutout of the season. The sophomore followed up her stellar performance with another straight-set victory against Averett. Playing at the No. 5 spot, Matute faced Garcia. She blanked her opponent in the first set and closed out the match with a strong 6-2 second set.

Tennessee Wesleyan sophomore German Delcanto had a strong showing this week for the Bulldogs. Delcanto swept his singles and doubles matches against Reinhardt and Point. In doubles, he paired with Ortiz at the No. 2 spot to defeat Reinhardt’s Puig Molina/Alexander and Point’s Pereira/Maust. Against Reinhardt’s duo, Delcanto and Ortiz dug deep and outlasted their opponents in the tiebreaker. In singles play, Delcanto shined for TWU. He only allowed his opponents six games total. Delcanto’s singles win streak currently sits at six straight.

Tennessee Wesleyan can count on sophomore Honoka Tsuji to come through for them on the court. Tsuji went undefeated this week in singles and doubles play against Reinhardt and Point. Splitting her time between No. 3 and No. 4 singles, Tsuji was a force to be reckoned with. Between her two matches, she allowed her opponents four total games. In doubles play, Tsuji paired with Ossio for two wins. The duo defeated Standing/Nelson of Reinhardt and McKenzie/Olayeye of Point.

East Central Community College’s Chris Lawrance helped lead the Warriors to three dual match victories this week. Playing at No. 1 singles, the sophomore won all three of his matches. Meridian’s Matthew Tennant forced a third set against Lawrance, but was unable to overcome Lawrance in the tiebreaker. In doubles play, Lawrance and partner Santitto rattled off three straight wins. They have won four straight matches together at the top of the lineup.

Hillsborough freshman Mbali Langa led the Hawks to victory over Eastern Florida State this week. The Hawks shutout Eastern Florida State for their sixth victory this season. Playing at the top of the lineup in singles and doubles, Langa went undefeated. Alongside her partner Zhadzinskaya, Langa blew past EFSC’s duo of Trifonova and Martincova. In singles, Langa faced Trifonova. The freshman Hawk took the first set, but dropped the second. Langa emerged victorious in the third-set tiebreak bringing her record to 4-3 on the season.