ITA #WeAreCollegeTennis
Home College Tennis News On to the Elite 8: Division I Women Ready for Battle 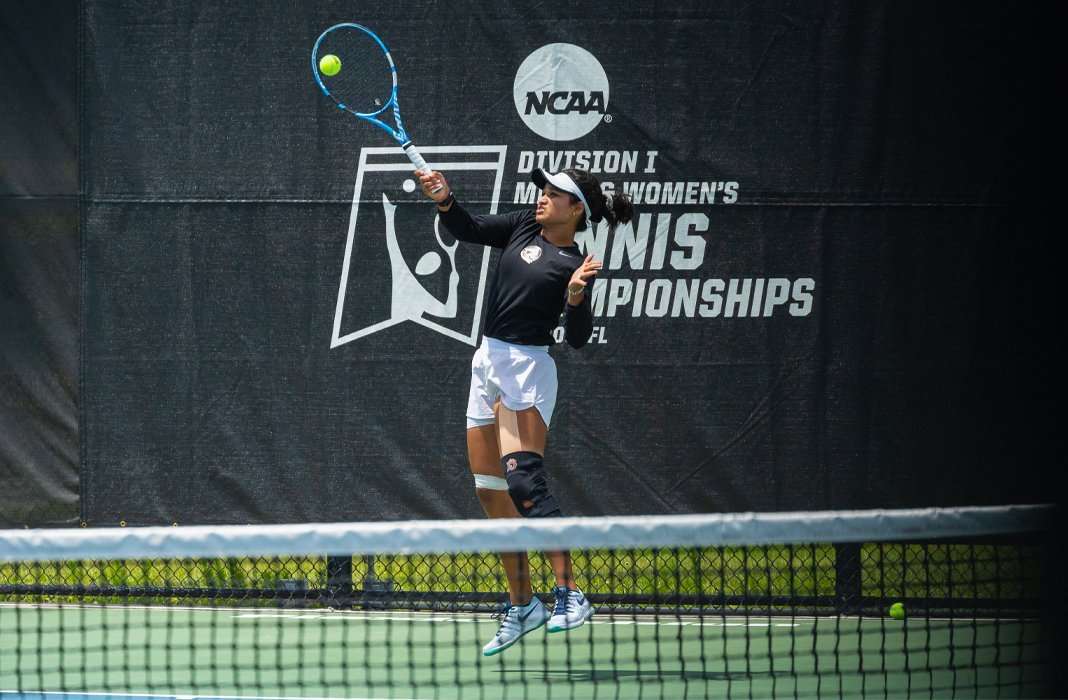 The 2021 DI women’s tennis championship continues at the USTA National Campus tomorrow. Seven seeded teams remain, with Duke upsetting No. 9 UCF to set up a quarterfinal meeting with No. 1 North Carolina.

(No. 3) Georgia vs. (No. 6) NC State | Wednesday, May 19 at 11 a.m. ET
The Georgia Bulldogs (23-1) advance to the quarterfinals following a 4-1 victory over Virginia in the Round of 16. Freshman Lea Ma sealed the win for Georgia in a third-set tiebreaker, upsetting Natasha Subhash 2-6, 6-3, 7-6(4). This was the first top-10 win for Lea Ma in her career. In doubles, the Bulldogs took the doubles point with Katarina Jokic and Ariana Arsenault defeating Rosie Johnson and Emma Navarro 6-4, clinching the doubles point for the Dawgs. Elena Christofi and Morgan Coppoc breezed through their match, upsetting No. 17 Sofia Munera and Natasha Subhash 6-2 on court two.

NC State (19-5) is amidst its deepest NCAA Championships run as it appeared in the program’s first-ever quarterfinals. The Pack reached the Round of 16 for the first time in 2019 and the second time in program history this season but had never advanced past that round until Sunday. The 2021 NCAA Championships berth marks NC State’s 11th overall appearance and its fifth season in a row qualifying for the event under the leadership of head coach Simon Earnshaw. That streak continues to stand as a program-best.

(No. 2) Texas vs. (No. 7) Florida State | Wednesday, May 19 at 2 p.m. ET
Texas (28-1) is making its 36th NCAA Championship appearance, and the Longhorns have posted a 55-33 all-time record in NCAA Tournament play. The Longhorns brought their “Texas Fight” in their matchup with Ohio State, taking them down 4-1. Texas captured NCAA team titles in 1993 and 1995 and posted NCAA runner-up finishes in 1992 and 2005. The Longhorns are making their 11th appearance in the NCAA quarterfinals (‘Elite Eight’) and first since the 2005 season (finished as national runner-up).

For only the second time in program history, FSU women’s tennis team advanced to the 2021 NCAA Quarterfinals. The seventh-seeded Seminoles defeated 10th-seeded Texas A&M 4-2 in the Round of 16 Sunday afternoon to move into the final eight teams still in the hunt for the 2021 National Championship.

(No. 4) UCLA vs. (No. 5) Pepperdine | Wednesday, May 19 at 5:30 p.m. ET
UCLA is set to face off with Pepperdine in the third match of the day. It marks the fourth meeting of the season between the SoCal rivals. The Bruins shut out No. 13 seed Georgia Tech to earn a spot in the NCAA Division I Women’s Tennis Championships quarterfinal round. Elysia Bolton clinched the victory for the Bruins, who did not drop a set in any of their completed contests. Abbey Forbes and Annette Goulak also prevailed on the singles courts, capitalizing on an early advantage seized in doubles play.

Pepperdine women’s tennis team wasted no time in blanking Michigan in the NCAA Round of 16, defeating the Wolverines 4-0 on Sunday afternoon. The Waves will advance into the tournament quarterfinals for the eighth time in program history and the fourth time in the past five seasons. Shiori Fukuda was next up for the Waves, crushing Jaedan Brown on court four, going 6-4, 6-1. Jessica Failla clinched for the Waves taking down Chiara Lommer 6-1, 6-3.

(No. 1) North Carolina vs. Duke | Wednesday, May 19 at NB 7:30 p.m. ET
Top seed North Carolina rolled past 16th seed California, 4-0, at the NCAA Women’s Tennis Team Championship on Sunday night. Carolina holds a 4-1 edge against the Blue Devils in the NCAA Team Championship, and the only previous quarterfinal matchup went to the Tar Heels, 4-3, in 2010. The Tar Heels got off on the right foot with a pair of victories in doubles to take the early 1-0 lead. UNC ended the chance for Michigan with a pair of near-simultaneous wins from court five by Fiona Crawley and from court four with Elizabeth Scotty – ultimately the clincher for the Tar Heels. Crawley is now 28-0 as a freshman, while Scotty improves to 14-3 in her second season with the program.

Blue Devil women’s tennis earned its second-straight victory over a top-ten opponent and advanced to the NCAA Tournament quarterfinal, upsetting No. 9 UCF, 4-3. The Blue Devils (18-6) earned the clinching victory in a thrilling three-set win by Chloe Beck. She bounced back from a first-set loss to finish off a 4-6, 6-2, 6-4 victory in the final match on court.

How to Watch, Keep Score, & More
The NCAA and USTA have partnered with the TennisONE app to broadcast selected matches via live stream. Fans are encouraged to download the TennisOne App, sign in, click on the NCAA Championships card at the top of the home screen, and scroll through the courts to find your match. Fans can also view this from their personal computer in mobile format, here. For more information about the 2021 NCAA Division I Men’s & Women’s Championship, broadcast and live stream coverage, and match times, follow us on social at ITA_Tennis (Twitter) and you can always check back here. Check out more from the USTA National Campus.

Tickets
A limited number of tickets are available for purchase by the general public for the NCAA Division I Men’s and Women’s Tennis Championships at the USTA National Campus. The Campus is permitted to allow up to 50% fan seating capacity per the NCAA’s updated fan attendance policy for outdoor championships. Tickets are available for purchase here. Fans are encouraged to buy tickets early as the very limited number of tickets are expected to sell out quickly for many of the sessions.