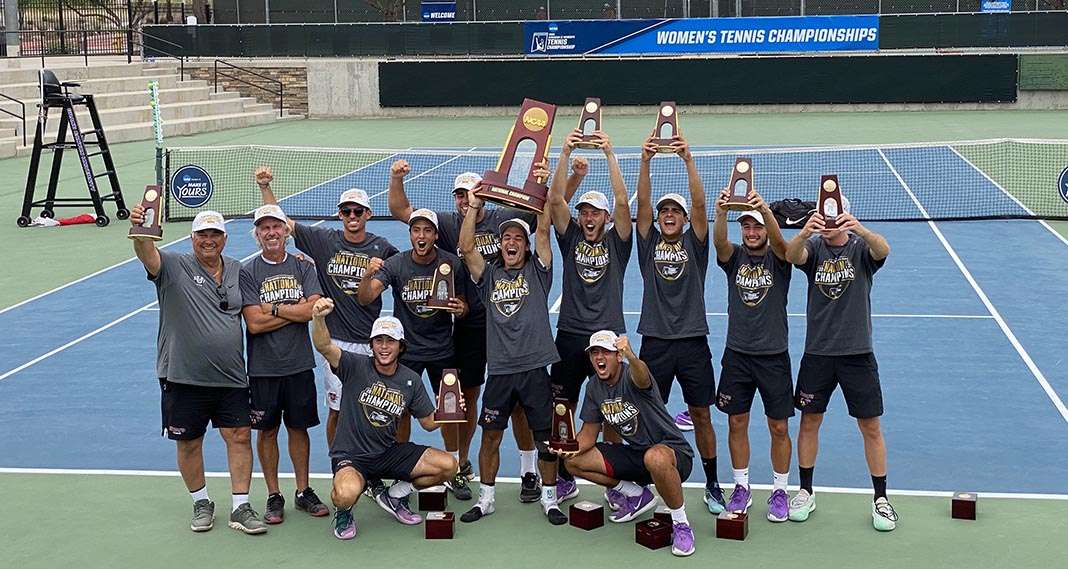 The match started out tight. In doubles, Columbus State and Barry each took a court by a landslide — No. 1 Regalado/Cueto Ramos blanked Forcano/Gutierrez and Giuliato/Buettner dominated Steen/Garay 6-1. With the teams at one a piece in doubles, the point would be decided at No. 3. Columbus State’s Martinetti and Schold got out to an early lead, but Rodriguez and Gallego battled back for the victory and the doubles point.

The Bucs headed into singles with the lead, but were not able to maintain the momentum. Coach Isaacs crew grabbed four of the six first sets. However, the back half of Barry’s lineup, Forcano and Buettner, held the line for their team and won their first sets. At No. 5 singles. Forcano strung together two 6-3 sets to extend the Bucs’ lead to 2-0.

It did not take long for the Cougars to answer with a singles victory of their own, though. No. 32 Tommaso Schold downed Alejandro Gallego in straight sets.

However, the path to the title for the Cougars began to narrow as the match progressed. After the Cougars took the first sets and gained early leads in the second sets at No. 1-4, the Buccaneers methodically worked themselves back into the match. At No. 1, 2, and 4 singles, Barry edged out CSU to force a third set.

No. 1 Giuliato was boosted by a late surge in the second that saw him win four games straight over No. 2 Regalado. Likewise, Palacios bounced back from dropping his first set 6-3 to winning the second 7-5. Finally, in perhaps the tightest match of the day, Rodriguez narrowly edged out Cueto Ramos in a second-set tiebreak to stay alive. As No. 1 and 2 singles started their third sets, Barry’s Buettner claimed his match bringing his team within one point of their fifth NCAA title.

With the Bucs up 3-1, Giuliato, Palacios, and Rodriguez engaged in a race to clinch the national championship for their team. Feeding off of his teammates’ energy, Alejandro Palacios powered to a 3-6, 7-5, 6-4 victory and clinched the match for the Bucs.

The 2021 NCAA title marks the fifth NCAA Championship for the Barry Buccaneers. The Bucs have appeared in the championship match an impressive 12 times.