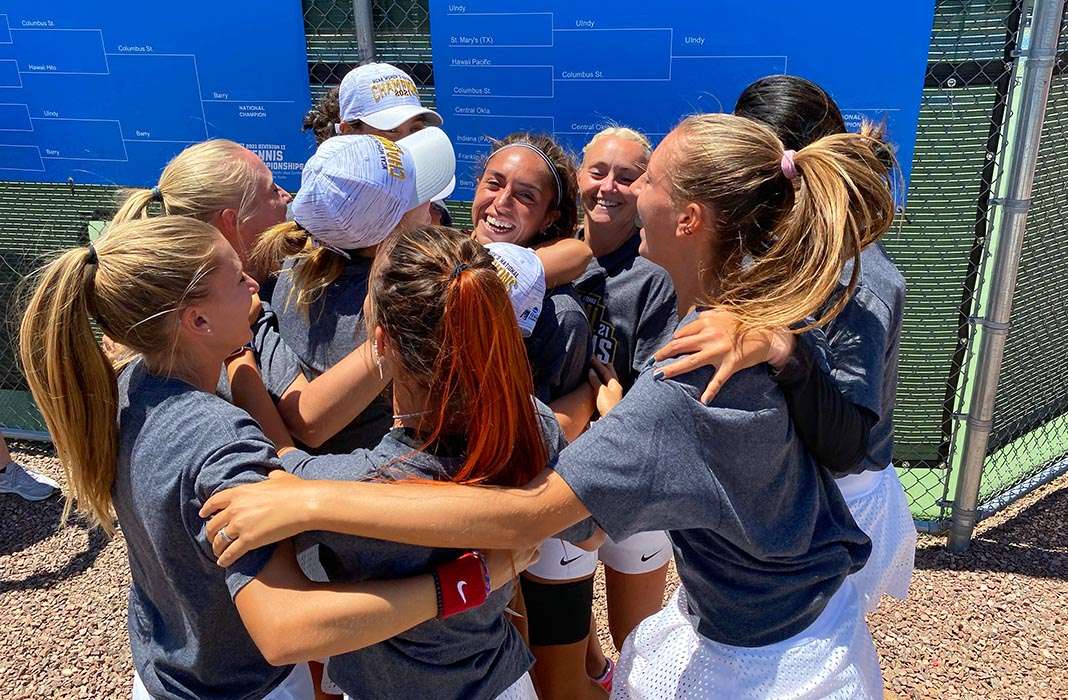 During Friday’s NCAA Division II Women’s Championship match, Barry Women’s Tennis looked like a team that had won the previous three NCAA titles. The Bucs were calm and composed — the stage was not too big for them.

The championship match was a battle between the two top ranked teams in the Oracle ITA Rankings and both of them were unbeaten. The Greyhounds were led by the No. 1 doubles team and No. 1 singles player — Nikol Alekseeva. Likewise, the Buccaneers brought a host of talent led by No. 2 Deniz Khazan.

It did not take long for Barry to get on the board. The Bucs clinched the doubles point on the strength of their No. 1 and 3 doubles pairs. At No. 3 doubles, Moosbacher and Farfan cruised to a win over Sharonova and Solnyshkina. No. 10 Khazan and Bosnjak downed the top doubles duo in the nation to clinch the point for their team. Khazan and Bosnjak served Alekseeva and Novikova their first loss of the season. The Bucs were also the first team this season to win the doubles point over the Greyhounds.

In singles, the Greyhounds and the Bucs were much more evenly matched. Barry only took half of the first sets, but it was just enough to get the job done. No. 2 Khazan, No. 20 Engelmann, and Farfan all had dominant first sets. At the bottom of the lineup, Farfan continued to be a reliable and commanding player. She blanked Sharonova in the first set – the first player to do so this season – and finished her off with a strong 6-3 second set. Farfan’s victory extended the Bucs’ lead to 2-0.

The final two points came shortly after Farfan’s win. At No. 2 singles, Engelmann improved on her 6-4 first set and sealed her victory with a 6-1 second set. The loss was only No. 8 Novikova’s second on the season.

With their fourth consecutive – and sixth overall – title within reach, the Barry players and fans shifted their attention to No. 1 singles. After Khazan blew out Alekseeva in the first set, the match had tightened. On deuce point, Khazan avoided heading to a third set and forced a tiebreak. The Barry junior had a strong start in the tiebreak and extended her lead to 3-0 before Alekseeva scratched her way back. Khazan dropped her first match point, but Alekseeva could not hold her off any longer. As Alekseeva’s return soared beyond the baseline, Khazan dropped to her knees in celebration.

The 2021 NCAA Championship is the sixth title won by Barry Women’s Tennis — all of which have come since 2011. With the 2021 title, Barry ties SIU Edwardsville’s record for the most consecutive NCAA titles (4).