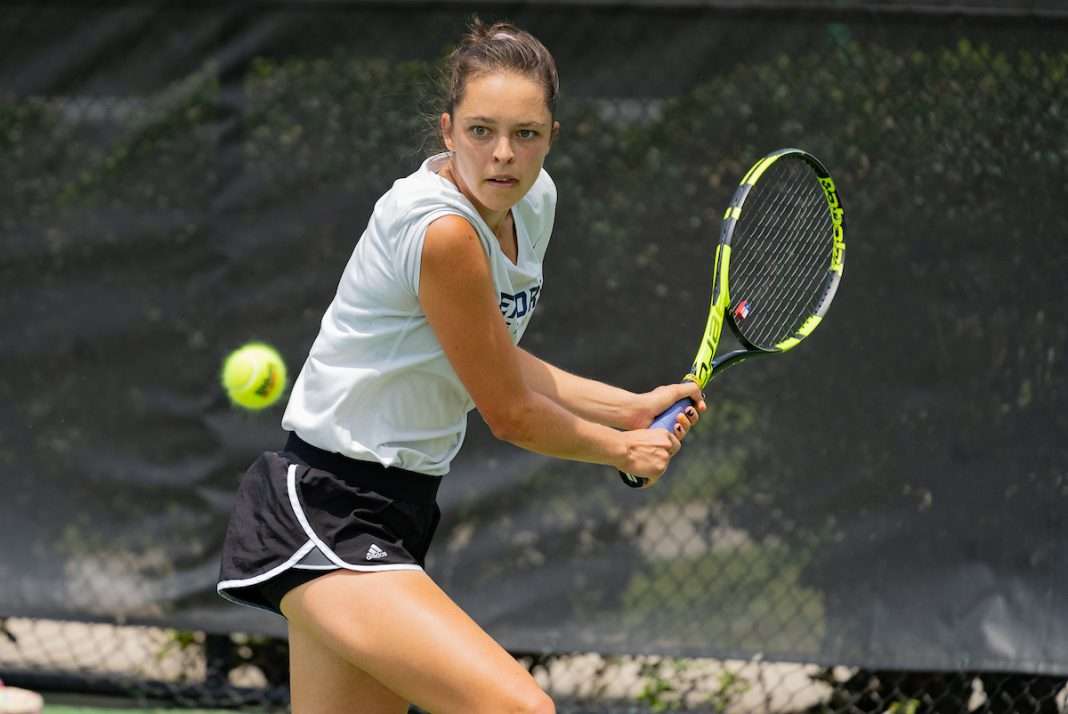 Wesleyan defeats Washington & Lee
The Cardinals are on the road to their national title defense as they went on a run for the first national women’s team title in school history in 2019. Wesleyan’s 5-0 triumph over No. 18 Washington & Lee sent the Cardinals to their second consecutive Final Four appearance.

In what was the first all-time meeting between the two programs, Wesleyan thoroughly dominated play as the Cardinals swept the three doubles points by a cumulative scoreline of 24-2 while singles play was even more dominating, as Wesleyan dropped just three total games in the six combined matches before the clinching point was made. That 5-0 triumph for the Cardinals signaled the fifth consecutive contested season Wesleyan has won at least one NCAA Tournament match.

Tuesday’s semifinal showdown will be the second all-time meeting between Wesleyan and Kenyon as the Cardinals won the only prior meeting in the series, a 6-3 win on March 10, 2019, in Orlando, Florida.

Kenyon defeats University of Mary Washington
No. 12 Kenyon women’s tennis team (11-0) moved into the NCAA Tournament semifinal round after a 5-2 win over No. 15 University of Mary Washington (14-3). The victory not only pushed Kenyon into its first semifinal appearance since 1998, it moved the team’s overall record to 11-0 for just the second time since joining the NCAC in 1984-85.

Doubles play was highlighted by a comeback win at No. 3 from Pukys and Eleni Dakos as Kenyon took a 2-1 match lead. At No. 3, Kenyon’s duo was down 5-2 before a double-flip against Hana Kimmey and Olivia Moore brought the tally to 5-4, Eagles, After that, Pukys and Dakos won four of the next five games to prevail 8-6. Kenyon’s second match point came from Ilana Blackwood and Victoria Vasquez. In another tight match, the Ladies’ No. 2 team was leading 5-4 over Claire Coleman and Amanda Hagino before an 8-5 win doubled the team’s match advantage. For Blackwood and Vasquez, it was their team-high seventh doubles win this season.

The Eagles did get on the board in the final match at one. Down 7-4, Abby Moghtader and Lauren Quinn rallied to win in tiebreaker fashion 8-7 (8-6) for Mary Washington’s lone doubles point. Once in singles, Kenyon shot ahead 4-1.

At No. 2, Daria Beshentseva cruised by Coleman by identical 6-1 scores while Vasquez remained unbeaten (9-0) with a straight-sets win against Quinn, 6-3 and 6-1, at the third flight. Rachel Cooper followed for the Eagles, winning at six by 6-3 and 6-4 counts to bring the tally to 4-2. However, just a while later, Pukys came through for the unbeaten Ladies. She dropped the first set to Hagino 6-1. Pukys won 6-4 in the second and then bagelled Hagino in the third.

Tomorrow, Kenyon will face Wesleyan University in the semifinal round.

Tufts defeats University of the South
Tufts University women’s tennis team advanced to the NCAA Final Four for the first time in program history following a 5-1 victory against the Sewanee Tigers.

Against Sewanee, the host team, the Jumbos took two out of three in doubles and then dominated singles to close out the victory. The Tigers finished their team schedule with a 10-3 record. The Jumbo No. 1 doubles pair of Maggie Dorr and Caroline Garrido got things started with a 8-1 victory against Catherine Owen and Emma Smith from Sewanee. Jumbos Casey Cummings and Rilly Rigby also won in second doubles with an 8-6 final to help give the Jumbos an edge heading into singles. Sewanee scored its only point of the match in third doubles with Caroline Adams and Jordan Besh defeating Jumbos Patricia Obeid and Maddie Suk 8-5.

The Jumbos were making just the second appearance in the Elite 8 in program history, joining the 2010-11 team. That group lost in the quarterfinals, making the 2020-21 team the furthest-advancing NCAA squad in Tufts women’s tennis history. The Jumbos (9-1) will play Emory University in the national semifinals on Tuesday at 10 am.

It will be the 12th consecutive time the Eagles will be among the final four teams making a run for the national championship and 21st time overall in program history. Emory will match up with Tufts University in the semifinals Tuesday morning.

The Eagles jumped out to a quick 2-0 start against the Pirates as Emory dropped just three games across the top two doubles matches. Ysabel Gonzalez-Rico and Katie Chang improved to 10-0 as they handled their opponents 8-1 on court one before Christina Watson and Stephanie Taylor won their fourth in a row at No. 2 doubles, ultimately getting the the 8-2 win.

The third doubles match was back-and-forth in the early goings before Ana Cristina Perez and Lauren Yoon pulled away late, winning the final four points for the 8-4 decision to give Emory another sweep in doubles. Gonzalez-Rico opened the singles portion with a victory at the No. 1 spot, defeating Nina Mitrofanova in straight sets 6-1, 6-1. The match concluded with Watson’s win on court two as she bested Esther Brown by 6-3, 6-1 count to seal the victory.

How to watch, keep score, & follow along
Fans can follow the semifinal match tomorrow with live stats and video which can be found here. For more information about the 2021 NCAA Division III Men’s & Women’s Championship, broadcast coverage, and match times, follow us on social at ITA_Tennis (Twitter).