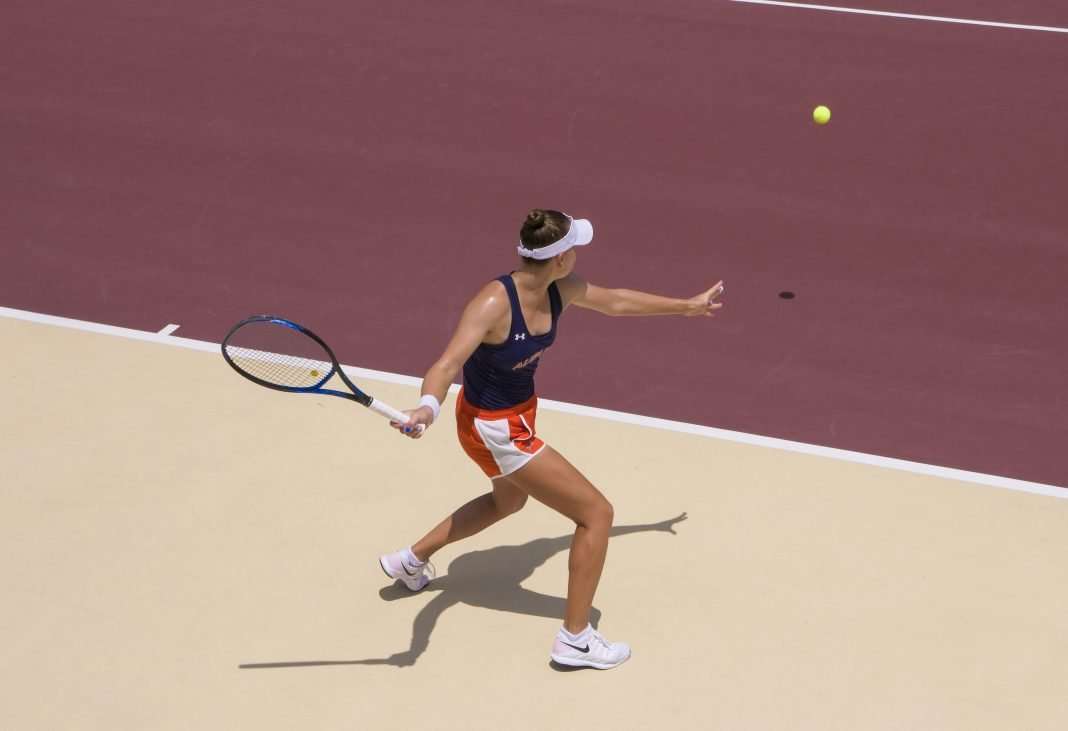 Despite a slow and rainy start, the first day of the 2021 ITA National Summer Championships featured plenty of action from top juniors and collegians at the Scott Speicher Tennis Center. In singles action, only the Round of 64 was played, while the first two rounds of doubles were completed.

Here are the takeaways from the opening day of main draw action – a continuation from the top-seeded men & women preview from yesterday.

Florida State’s Petra Hule had no issue advancing past the opening round of the National Summer Championships. She faced Samford’s Samantha Maras midday at the Speicher Tennis Center. Hule posted identical 6-2 sets to move on. She will face Ena Babic of LSU tomorrow morning at 9:30 am ET.

Top seed Trey Hilderbrand is still in the hunt for the singles title. The UCF junior downed Mitchell Johnson of San Francisco in his opening round match. After taking the first set 6-1, Hilderbrand dug in and held off Johnson’s attempt to stretch the match to a tiebreak. His 6-1, 6-4 victory advances him to his Round of 32 match tomorrow at 8:00 am ET against Oliver Johansson of Drake.

Battling through the midday heat, Florida State’s Victoria Allen took on incoming Maryland freshman Mary Brumfield. The Terp hung tough in the first set, but Allen managed to take the first set 7-5. In the second, Allen racked up three games before Brumfield was forced to retire. Tomorrow, Allen will face Noor Carrington at 11 am ET for a spot in the Round of 16.

South Carolina’s Connor Thomson advanced to the Round of 32 with a 6-1, 6-2 victory over Ethan Silva. The sophomore will continue his bid for the title tomorrow at 9:30 am ET against Kentucky’s Jj Mercer.

The run to the title continues on for Csilla Fodor. In the opening round of play, the Purdue student-athlete defeated Marina Cozac in straight sets. Fodor easily claimed the first set, but Cozac was not going to go down without a fight. Cozac narrowed the gap in the second set, but fell short and dropped the match. Fodor will face Gabriella Broadfoot at 9:30 am ET tomorrow morning.

Michigan’s Jacob Bickersteth powered past Will Leathers in the opening round of singles play. In commanding fashion, Bickersteth posted identical 6-1 sets over Leathers. He will face Presbyterian’s Maxwell Benson in the Round of 32 at 8:00 am ET.

Auburn’s Carolyn Ansari rolled past Hofstra’s April Sanchez to reach the Round of 32. Ansari wasted no time in her match and blanked Sanchez in the opening set. In the second, Sanchez was able to get on the board with one game before Ansari clinched the match. She will face Vanderbilt’s Marcella Cruz tomorrow at 10:45 am ET.

Northwestern’s Presley Thieneman was not phased in his opening round match with Reid Aaron. Thieneman started strong and posted a commanding 6-1 first set over Aaron. In the second set, Thieneman blanked Aaron to advance. He will face Maxwell Giddens of Auburn tomorrow at 8 am ET.

Jaeda Daniel rolled on to the second round of play at the National Summer Championships. The NC State standout blanked Samford’s Alyssa Hayduk in the first set and finished the match with a 6-2 second set. Daniel will look to continue her run to the title against North Florida’s Annabelle Davis tomorrow at 10:45 am ET.

Florida State’s Richard Thongoana advanced to the Round of 32 today after defeating Carter Morgan of South Carolina. Thongoana easily took both sets. He only allowed Morgan four games total in the match. He will face Henry Cacciatore of Nebraska tomorrow at 8:00 am ET for a spot in the Round of 16.

So far, so good for six-seed Malkia Ngounoue. The Jayhawk downed junior Kylin Sadler in straight sets to advance to the Round of 32. Ngounoue’s experience helped her get off to a fast start. After taking the first set 6-1, Ngounoue had a bit more trouble putting Sadler away, but ultimately sealed the victory with a 6-4 second set. Ngounoue will continue her bid for the title tomorrow at 11 am ET against Furman’s Madison Dillon.

Six-seed Jake Beasley faced Harrison Janes of Penn State in the first round of play. The South Carolina student-athlete allowed Janes three total games before clinching the match. After taking the first set 6-2, Beasley closed out the match 6-1. He will face Aaron Eliscu tomorrow at 8:00 am ET.

Catherine Gulihur had control of her match against Virginia Tech’s Chhinda Som from beginning to end. Som only managed to take one game in each set – otherwise, it was all Gulihur. The North Florida senior clinched her match 6-1, 6-1 to secure her spot in the Round of 32. She will match up against Southwestern’s Nina Mitrofanova tomorrow at 9:30 am ET.

Keshav Chopra dominated his opening round match with Xavier’s Marco Pennelli. The Georgia Tech redshirt sophomore opened with a statement 6-0 first set. In the second set, Pennelli snuck in one game before Chopra closed out the match. The Yellowjacket will play Bennett Turner of Boston College tomorrow at 8:00 am ET.

Wisconsin’s Xinyu Cai defeated Illinois’ Josie Frazier in the opening round of play. The two Big 10 athletes faced off midday for a spot in the Round of 32, but Cai was too much for Frazier to handle. The Badger won 6-1, 6-1 to advance. She will face Ohio State’s Madeline Atway tomorrow at 9:30 am ET.

Florida’s Lukas Greif rolled past Chattanooga’s Kaisei Kuroki in his opening round match. The senior Gator only allowed Kuroki two games in the match and they both came in the first set. Greif slammed the door shut on Kuroki in the second set with a 6-0 set. He will match up with Rollins’ Charles Putrino III tomorrow at 9:00 am ET.

Check out the rest of the action from Day 1 of the National Summer Championships!