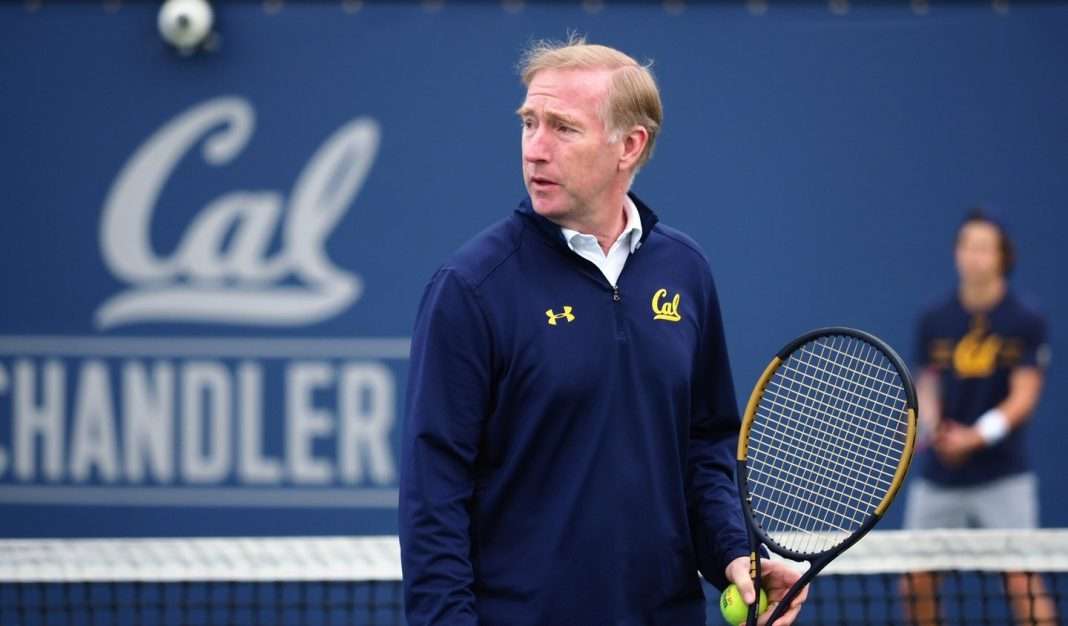 Peter Wright, who generated more wins and NCAA Tournament berths than any coach in Cal men’s tennis history, announced Wednesday that he is retiring as Director of Men’s Tennis, completing a 29-year term leading the program.

The ninth coach in the long history of Cal men’s tennis and a Golden Bear alum, Wright amassed a 383-256 record during his tenure in Berkeley. He guided Cal to the NCAA Championships 25 times, including 20 consecutive seasons from 1994-2019 before the pandemic caused the cancelation of the 2020 postseason tournament.

“Peter has been a part of Cal tennis for more than three decades as both a student-athlete and a coach, and he leaves us with a host of honors and more wins and NCAA appearances than any coach in our history,” Cal Director of Athletics Jim Knowlton said. “His players have achieved success on the court, while consistently graduating at a very high level at the nation’s No. 1 public university. He has left his mark on Cal tennis, and we wish Peter the best of luck in his next chapter.”

Wright graduated from Cal with his degree in social science in 1991, and he took over the reins of the program two years later. Over the ensuing 29 seasons, Wright led the Bears to at least the NCAA Round of 16 on 11 occasions, including a semifinal berth in 2016.

Under his direction, Cal finished the year ranked among the nation’s top 20 14 times, with four appearances in the top 10. The 2004 squad ended the season ranked No. 4 in the nation, while his 2016 team was rated No. 9.

“It has been an honor to have been part of the Cal tennis program as a player and a coach for almost four decades,” Wright said. “Our world-class university has given me the opportunity to coach, without question, some of the finest young men and tennis players anywhere, and the privilege of contributing to their growth and development as students, athletes and caring, well-balanced individuals has been beyond fulfilling. I am eternally grateful to everyone who contributed to my playing and coaching career for the past 40 years, and proud of my role in leading our program and building the platform for its continued success.”

Added former Pac-12 commissioner Larry Scott: “I am very appreciative of Peter’s many contributions to the development and success of men’s tennis in the Pac-12 during my 11 years as commissioner. Not only has he been one of the most respected leaders in our league, but he has been a superb national representative of the conference and our sport.”

Wright was a three-time Pac-12 Coach of the Year, earning honors in 1997, 2001 and 2016, and he was chosen the Wilson/ITA Regional Coach of the Year in 1994. He was presented the 2012 USTA/ITA National Campus & Community Outreach Award for providing a leadership role in increasing tennis participation throughout his community, both on and off campus. In addition, in 2017 he received the prestigious ITA Meritorious Service Award , which is given annually in recognition of an ITA coach who has gone above and beyond in his or her commitment and contributions to the ITA and college tennis in general.

Under Wright, 16 Cal players combined to receive 20 ITA All-America selections, while Golden Bears earned either first- or second-team All-Pac-12 honors 39 times. Conor Niland was voted the 2016 Pac-10 Singles Player of the Year, and Balazs Veress/Patrick Briaud (2004) and Christoffer Konigsfeldt/Campbell Johnson (2013) were tabbed the Pac-12 Doubles Teams of the Year. Three Bears – Veress (2001), Johnson (2013) and Yuta Kikuchi (2019) – were chosen the conference Freshman of the Year.

Wright’s teams also excelled in the classroom with 48 student-athletes receiving either first- or second-team Pac-12 All-Academic honors during his tenure. Cal’s men’s tennis teams earned a perfect 1,000 Academic Progress Rate every time the score was compiled, and the Bears had a 100 percent Graduation Success Rate each of the past five years.

For almost 30 years, Wright has served on the board of directors of Youth Tennis Advantage, a Bay Area chapter of Arthur Ashe’s NJTL, dedicated to serving inner-city communities. In 2003, he helped establish the BearTrax program at Cal, utilizing members of the men’s and women’s tennis teams to offer tennis and academic tutoring and life skills training to underserved youth. In addition, the California Alumni Association has dedicated a TAAP scholarship in Wright’s name supporting low-income, first-generation college students in their pursuit of a Berkeley education.

As a player, Wright’s highlights on the professional tour included appearances at Wimbledon and the Australian Open. He represented Ireland in Davis Cup from 1988-95 and served as Irish Davis Cup captain from 1995-2003. Wright also served as the head coach for Ireland at the 1996 Olympics in Atlanta. He has earned induction into the USTA Northern California Hall of Fame and into the Berkeley High School Hall of Fame.

Amanda Augustus, now in her 14th season as head coach of the Cal women’s team, will serve as interim men’s coach. A national search will be conducted to find a new full-time leader for the men’s program.