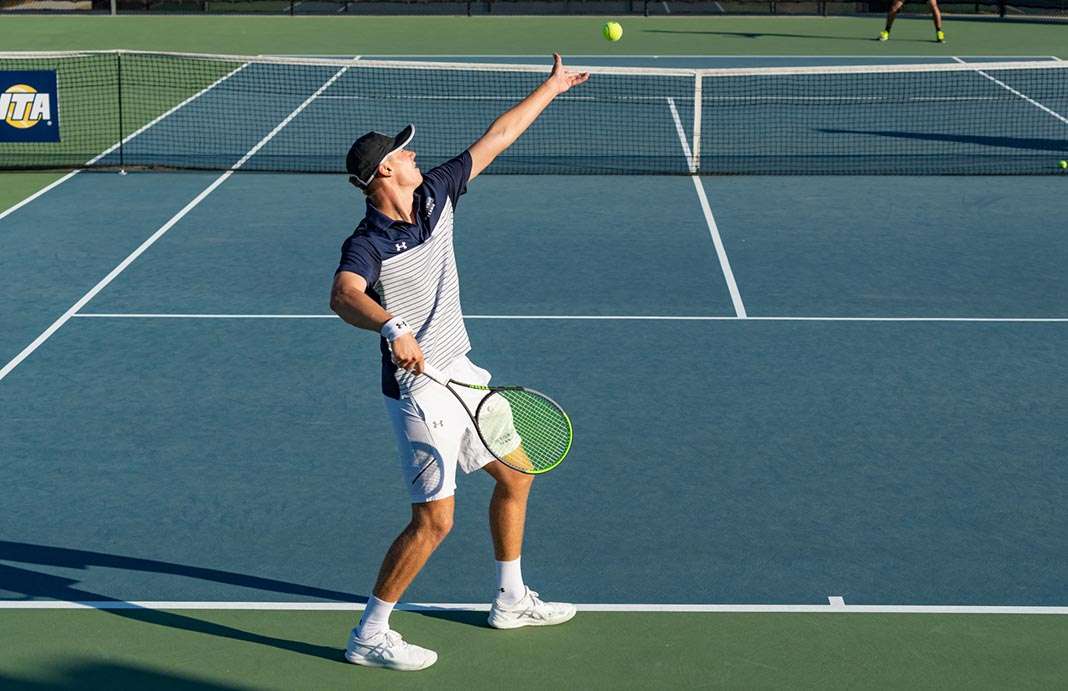 In the East Regional hosted by Queens College, Tom Jarry of Le Moyne College emerged victorious from the competitive pool of athletes. Jarry, who entered as the six-seed, started off with a bang as he beat out Juan Estevez Hernandez of the University of the District of Columbia 6-2, 6-0. Jarry kept the momentum rolling into the third round and quarterfinals as he posted 6-4, 6-2 victory over St. Thomas Aquinas College’s Ludovic Truffelli and a 7-5, 6-4 win over Southern New Hampshire University’s Thomas Guy. It was not until the semifinals that Jarry faced some adversity, as Kareem Rashad of Queens College applied pressure by forcing a tiebreaker in the third set. Jarry tallied a 11-9 tiebreaker win to propel him into the finals, where he would face off against Jonathan Berling of Southern New Hampshire University. The freshman from Norway also gave Jarry some trouble, as the match had to be decided by a third set tiebreak. Ultimately, Jarry outlasted Berling for a 1-0 (5) win, thus claiming the Division II East Regional Crown.

The Atlantic Regional was hosted by Bloomsburg University, but was dominated by the University of Charleston, who swept the singles and doubles events. The winner of the singles tournament was graduate transfer Daniel Llorente who hails from Malaga, Spain. The current Charleston Golden Eagle previously played for four years at the Metropolitan State University of Denver. Llorente won in the finals by walkover due to an injury. As such, his teammate John Giesberts finished as the singles runner-up. Giesberts was also a part of the doubles team that took home the crown, adding yet another victory to the University of Charleston resume.

At the Division II Women’s Midwest Regional, University of Indianapolis teammates Anna Novikova and Isabella Dunlap met for an epic finals matchup. Both players came into the regional tournament with impressive resumes, including a No. 1 seed for Novikova. Although Dunlap came in with a lower seed, the former 2019 National Rookie of the Year was able to pull off the upset victory over her higher-ranked teammate to claim the title, but not without a fight from Novikova. After winning the first set 6-4, Dunlap dropped the second 3-6, before finishing off her Greyhound teammate 6-4 in the final set.

* Results from the East Regional will be updated as the information is reported to the ITA.

Host school George Fox University won the day at the Division III Men’s Northwest Regional, sweeping the events with wins in both singles and doubles. Home-court advantage was well and alive as Luke Lemaitre and Will Leach battled it out for the singles championship, and then later joined forces to win the doubles event. Leach, a two-time Northwest Regional champion, was a tough out, but Lemaitre was able to pull off the upset over his higher ranked teammate. With the win, George Fox University claimed the singles crown for the fifth straight time. If there were any hard feelings between the teammates, they put it aside quickly as Lemaitre and Leach relied on team chemistry to breeze through to the doubles finals, where they beat Quintin Gonzalez and Aidan Rooney of Pacific University to bring the doubles title back to GFU for the first time since 2018.

The Northeast Regional also featured a teammate vs. teammate duel in the finals, as New York University’s Dakota Fordham and Carol Plakk met for a friendly matchup. The newcomers, who were playing in what was only their second collegiate tournament, showed no nerves as they breezed through the competition. In the championship match, Plakk won the first set 7-5, but she was forced to retire due to severe cramping, handing the title to Fordham. The duo also teamed up to win the doubles event, where they handily beat Charlotte Roarty and Jenny Landells of The College of New Jersey in straight sets,  6-1, 6-1.

Although play at the NAIA Men’s South Regional was suspended due to inclement weather, players from Georgia Gwinnett College were still able to make a run in both the singles and doubles events. Georgia Gwinnett teammates Alex Gurmundi and Agustin Tamagnone were slated to meet in the finals, before the play was suspended. The championship final will be rescheduled for sometime later in the fall.

At the NAIA Men’s Florida Regional, it was Keiser University’s Luke Simkiss who bested Seahawks teammate Yassir Kilani to claim the win and his spot in the ITA Cup. The straight set smackdown (6-1, 6-3) marked Simkiss’ first ever ITA regional title victory. The Englishmen came into the tournament ranked as the No. 1 seed, and never relinquished his crown.

Just like the men’s side, the NAIA Women’s South Regional was also unable to finish play and crown a winner due to weather. The Georgia Gwinnett College women were just as dominant as the men, as Grizzlies teammates made up three of the four available semifinal spots. Two of the three Grizzlies advanced to the finals. Teammates Iryna Lysykh and Selina Pichler are slated to face one another for the championship once the match is rescheduled.

The Southeast Regional hosted by Georgetown College was a one-woman show. Stephanie Petit of Montreat College showed she was deserving of the tournament’s No. 1 seed as she did not drop a single set en route to her finals appearance. In the championship match, Petit blanked No. 3 seed Teodora Jovic of Union College to cap off the impressive solo run. Petit also dominated the doubles tournament with teammate Valerie Quiceno Ibarguen, where they were also ranked No. 1.

Keiser University was the big winner on the women’s side of the Florida Regional as freshman Nicole Coopersmith claimed her first ever ITA Regional Title. Coopersmith faced the hefty task of beating her doubles partner, Vanja Vidanovic, and was able to do so, winning handily 6-4, 6-2. The two were dominant as a pair, winning the doubles championship in historic fashion, as the duo is now the first pair of freshmen in program history to win a doubles title.