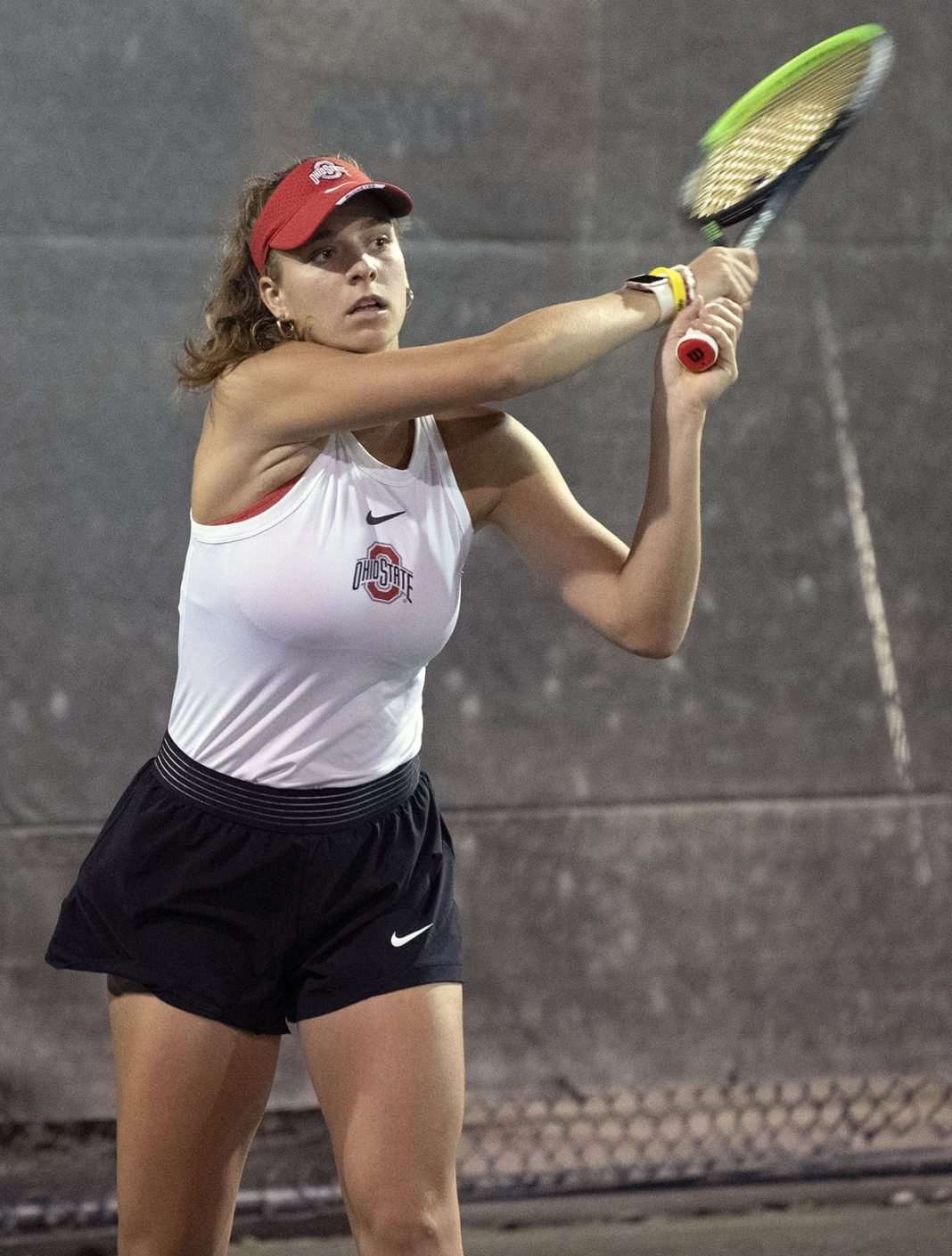 Getting (mostly) back on track.

That was the theme for Wednesday’s play at the 2021 ITA Women’s All-American Championships by LTP, following a day of rain that ultimately wiped out Tuesday’s schedule.

While the rain did return to the Charleston, South Carolina area for a while on Wednesday, and caused the doubles draw to be pushed to a Thursday start, the skies held clear long enough for singles play to find a solid rhythm. After completing the final round of qualifying, the main draw Round of 32 commenced late in the afternoon and concluded deep into the evening.

For updates to the schedule and to view all of the draws, be sure to bookmark the ITA Women’s All-American Championships by LTP tournament page. Live scoring is available for the remainder of the championships, courtesy of Tennis Ticker. You can follow along with the action here.

In Round of 32 main draw action, Carolyn Campana of Wake Forest defeated Bunyawi Thamchaiwat of San Diego State 6-4, 6-1, while Ohio State’s Irina Cantos, seeded fourth, battled through a close first set with Florida’s Marlee Zein 7-5 and took the second 6-2 to advance to the Round of 16.

North Carolina State’s Alana Smith continued her strong play at the 2021 ITA Women’s All-American Championships by LTP. Smith, the top seed in the qualifying draw, turned back No. 7 seed Viktoriya Kanapatskaya of Syracuse in the Round of 32 6-3, 6-0.

Valeriya Zeleva of UCF outlasted Washington’s Vanessa Wong 2-6, 6-4, 6-1. Alexa Noel of Iowa won her opening round contest 6-3, 6-2 against Gina Dittman of Northern Arizona. Emmanouela Antonaki of Mississippi State is through to the Round of 16 after her 6-1, 2-6, 7-6 (3) thriller over Duke’s Chloe Beck.

Top-seeded and No. 2-ranked Abbey Forbes of UCLA won her opening round match over Furman’s Julia Adams 6-3, 6-1. Second-seeded and No. 3-ranked Janice Tjen of Pepperdine moved into the Round of 16 with a 6-3, 6-3 victory over Tulsa’s Laia Conde Monfort.

Duke’s Georgia Drummy, the No. 5-ranked player, bested Pepperdine’s Shiori Fukuda 6-1, 6-4. Fukuda’s teammate Taisya Pachkaleva carried her momentum from the qualifying draw into the main, as she moved into the Round of 16 with a 6-3, 6-4 win over Auburn’s Selin Ovunc.

Eryn Cayetano of USC, another player who earned her spot in the main draw through qualifying, advanced to Thursday’s Round of 16 with a 6-2, 6-4 decision against Georgia’s Meg Kowalski. Cayetano will be joined by teammate Salma Ewing in the Round of 16. Ewing bested Duke’s Kelly Chen 6-4, 6-3, in the opening round.

Wednesday morning began with the final round of qualifying singles. With eight spots in the main draw on the line, competitors had plenty to play for.

Alana Smith of North Carolina State, the No. 1 seed in the qualifying draw advanced into the main draw with a straight set victory over Oklahoma’s Carmen Corley. Florida’s Marlee Zein defeated three ranked opponents to secure her main draw spot.

Victoria Hu of Princeton moved into the main draw with a 6-3, 6-2 win against Oklahoma’s Ivana Corley. Rounding out the qualifiers advancing to the main draw was Pepperdine’s Shiori Fukuda, who topped Anna Brylin of Wake Forest 6-4, 6-4.