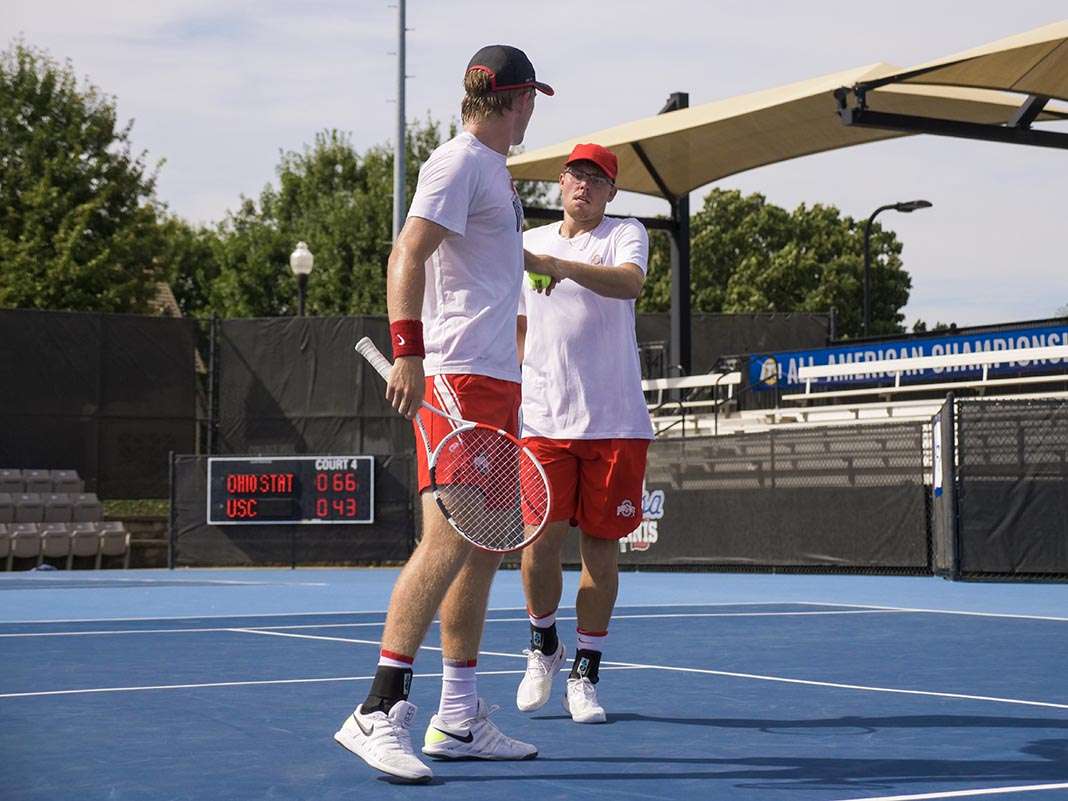 After four days of play, the championship matches are set at the 2021 ITA Men’s All-American Championships. In both the singles and doubles matches, history stands to be made.

Both Shelton and Holmgren will be in pursuit of their program’s first All-American Championships title tomorrow. Florida has placed an athlete in the finals three different times, but has fallen short of lifting the trophy. The Toreros, on the other hand, have never reached the championship match.

For only the second time in event history, the doubles final will be an intra-squad matchup. In 1985, the inaugural year of the tournament, USC’s Jensen/Lozano and Leach/Pawsat played each other in the final. The Buckeyes have a strong history in the All-Americans doubles championship. They have the second-most finals appearances in event history and have won the title twice. Tomorrow’s guaranteed title will be the first for the Buckeyes since 2011 when Buchanan and Rola lifted the trophy.

For the second year in a row, the Florida Gators placed an athlete in the All-Americans finals. Following in the footsteps of Sam Riffice, Ben Shelton powered his way to the championship match Saturday morning. The Florida sophomore faced Washington’s Clement Chidekh in the semifinals. The two traded games early on in the first set, but Shelton went ahead 5-3 after winning a deuce point. From there it was all Shelton. He rattled off another game to take the set and the momentum. Shelton did not allow No. 72 Chidekh to win another game, blanking him in the second set.

Today’s match continued Shelton’s near perfect run through the tournament. He has not dropped a set and has only allowed 28 games. Tomorrow, Shelton will look to become the first All-American Championships champion in Florida program history.

Meeting Shelton in the finals is San Diego’s August Holmgren. While Holmgren will also be looking to win the first All-American title in Torero program history, he has already made history for his squad. The redshirt senior is the first San Diego student-athlete to reach the finals of the Men’s All-Americans.

Holmgren reached the finals after downing tournament Cinderella Andre Ilagan from Hawai’i. While Ilagan hung tough with Holmgren through both sets, he could not close out. In the first set, the two traded games, but Holmgren pulled ahead to take the set 6-4. To start the second set, Ilagan came out hot and grabbed two games. Despite Ilagan’s strong start, Holmgren chipped away and eventually took the lead and sealed his win. During the All-American Championships, he has won three out of his five matches in straight sets.

In the doubles semifinals it was all Buckeyes. Both Ohio State teams advanced to the finals with straight-set wins.

The tandem of Boulais and Trotter was the first to advance. They downed USC’s Frye and Dostanic 6-4, 6-3. After taking the first set, the Buckeyes shot out to a 2-0 lead in the second. The Trojans got on the board next, but they could never close the gap. At 4-3, Boulais and Trotter put on the gas and clinched the match.

On the adjacent court, Cash and Vocel were working Tennessee’s Mitsui and Hudd. The Buckeyes came out hot and posted four straight games before the Vols got on the board. Mitsui and Hudd only grabbed one more game before Ohio State closed out the set. In the second set, the Buckeyes once again started strong. Up 2-0, they only lost their lead once the entire set when the Vols grabbed a 4-3 lead. Down for the first time in the match, Cash and Vocel responded and won the final three games.

Play resumes tomorrow morning with the singles final at 10 am CT and the doubles final at 12 pm CT. Live streaming and scoring will be provided for the matches on the Tulsa website.