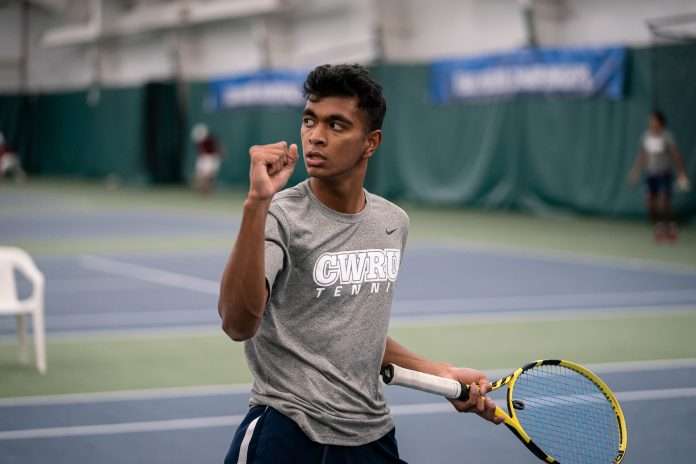 After a busy first day of action which saw the tournaments No. 2 and No. 3 seeds fall, day two of the 2022 ITA DIII Men’s National Team Indoor Championship played much more favorably to the higher seeds with Chicago (No. 6) and Case Western Reserve (No. 1) both cruising to comfortable wins.

In the morning session of today’s Semifinal action, the two surprise stories from the opening day of play, Chicago (No. 6) and Wash U (No. 7), faced off to determine who would reach tomorrow’s Championship match.

With all three doubles points determined through tiebreaks, Chicago was ultimately able to break through on all three courts to hold a 3-0 lead heading into singles play. In the singles portion, it was more of the same for the Maroon as they added five singles wins to their total en route to their 8-1 victory.

In the second Semifinal match of the day, the hosts Case Western Reserve (No. 1) faced off with Trinity (No. 4) in front of a passionate crowd at the Mayfield Village Racquet Club.

Similar to our morning session, Case Western Reserve gained huge momentum after doubles play as they swept all three points heading into singles. In singles, the Spartans didn’t let up an inch winning five more points to secure their spot in tomorrow’s Championship match.

For fans hoping to attend or watch the 2022 DIII Men’s National Team Indoor Championship Match tomorrow, first serve will be at 8 am (ET) with Live Stream and Live Stat links being found through our Tournament Central Homepage here.

Maroons Bring ITA Title Back to Chicago with Win Over Emory