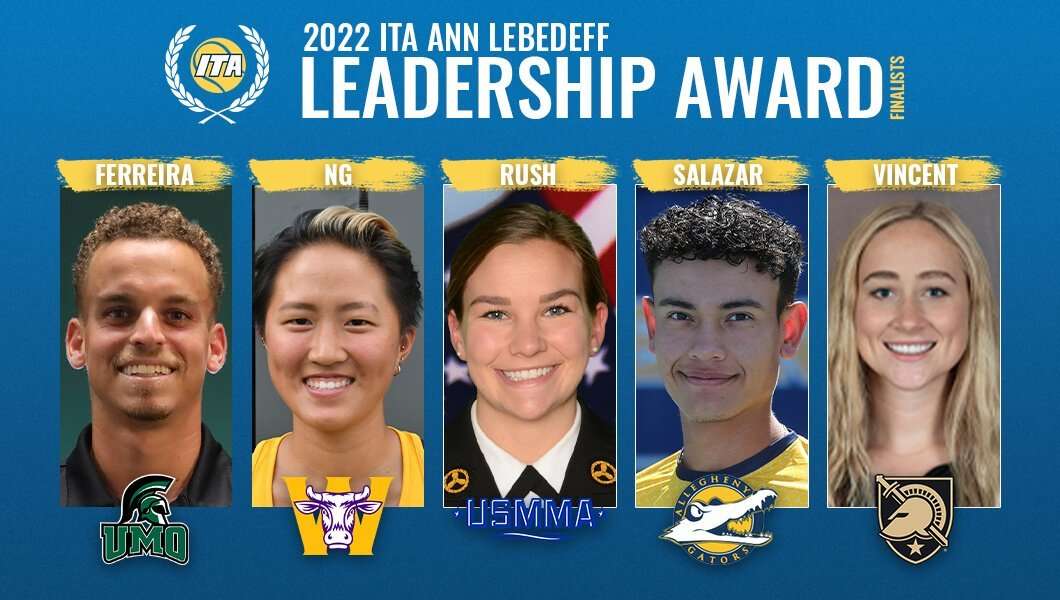 The Intercollegiate Tennis Association (“ITA”) is pleased to announce the five finalists for the 2022 ITA Ann Lebedeff Leadership Award as endowed by Billie Jean King.

Representing one of the ITA’s highest student leadership awards, Armando Ferreira (Mount Olive), Maxine Ng (Williams College), Mackenzie Rush (United States Merchant Marine Academy), David Salazar (Allegheny), and Caroline Vincent (Army) have all been selected as finalists for this prestigious honor in recognition of their distinguished efforts on and off the court.

The ITA Ann Lebedeff Leadership Award, as endowed by Billie Jean King, was created to honor a recent college graduate who played college tennis, demonstrated excellence in all aspects of being a student-athlete, was a leader on his or her team, and was an influential contributor on his or her college campus and community.

The recipient of the award will have demonstrated grit (i.e. passion and perseverance towards long-term goals), a commitment to social justice and equality, and will have pushed others to be leaders in addition to demonstrating his or her own leadership.

“The ITA offers one of the most robust awards programs in college athletics,” said ITA Chief Executive Officer Dr. Timothy Russell. “Our sport and Association help develop championship human beings and these scholar-athletes, the finalists for this prestigious award, represent the best of the best in representing college tennis.”

The five 2022 finalists, who have already submitted personal statements as well as letters of support from coaches, teammates, and professors, will now submit a resume and letter from their institution’s President to be reviewed by the ITA Ann Lebedeff Award Selection Panel. Once determined, the winner will be awarded a post-graduate scholarship, while a $1,000 donation will be made to the award winner’s college tennis program from the ITA.

Long before he was a team captain and recognizable member of the Mount Olive community, Armando Ferreira had to overcome many obstacles just to get the opportunity to play at the collegiate level. Coming from Brazil, Ferreira made a deal with his father when he was just 18-years-old to cover half of a year’s tuition so that he could get to Mount Olive where he would figure out the rest. Once at Mount Olive, Ferreira immediately began working numerous jobs around campus while still excelling in the classroom and on the court. Now in his final year with the Trojans, Ferreira’s leadership and hard work have shined through to many not just on the courts but well beyond them as well. Armando plans to graduate from Mount Olive this spring with a degree in Business Accounting.

For Maxine Ng, uplifting those around her and serving those who may be underserved are things that have just come naturally. When Ng arrived at Williams College, she immediately dove headfirst into many causes surrounding diversity and inclusion joining a research team in the spring of 2019 that looked at water quality in underserved areas. On the court, Ng has served as a vital member of the Williams College team giving her all in any activity or task thrown her way. Now in her senior season, Ng has taken on more leadership roles within the team where she continually engages all of her teammates and encourages them to reach their fullest potential.

At the United States Merchant Marine Academy, Senior Mackenzie Rush has been blazing trails and leaving a lasting impact on people since the day she first set foot on the Academy. In a school made up of nearly 70% males, Rush did not let this deter her from reaching new heights not only within various programs at the academy but in sport as well. This past year, Rush was selected as a Company Commander and was responsible for the day-to-day actions of over 160 Midshipmen. In addition to these duties, Rush also serves as the secretary of the Kings Point Open Seas Club which provides a safe place for LGBTQ+ individuals while also advocating for women within the USMMA through various other programs. On the court, Rush became the first female team captain for the USMMA Men’s Tennis team where she has redefined the standard of team captains for all who follow.

Allegheny College’s David Salazar has been fighting and encouraging others long before he even stepped foot on campus. After being diagnosed with cancer at the age of six, Salazar had to endure four years of chemotherapy and many other long-lasting effects of this fight that he still battles with today. Coming from a low-income household, Salazar has had many cards dealt against him over his lifetime, but instead of letting those get him down he instead is writing his own ending by how he influenced others on a daily basis. Serving as a team captain, Salazar is a guiding light for many of the younger student-athletes on the Allegheny College Men’s Tennis team. As a USTA certified instructor as well, Salazar spends his free time teaching the sport that has given him so much to the next generation of players.

Those who have known Caroline Vincent can tell you that two things that have always surrounded her life have been public service and tennis. Electing to attend the United States Military Academy over many other high-level Division I programs, Vincent continued her mission to serve others and has thrived in the process. Selected as a Battalion Commander this year, Vincent currently is responsible for over 380 cadets where she ensures the Battalion meets all brigade standards. On the court, Vincent is a team captain where she has guided many service opportunities and community events promoting tennis and giving back to the community. Also a scholar, Vincent has received Academic All-League honors these past two years where she has achieved the highest GPA of all athletes across the nine Patriot League Universities.