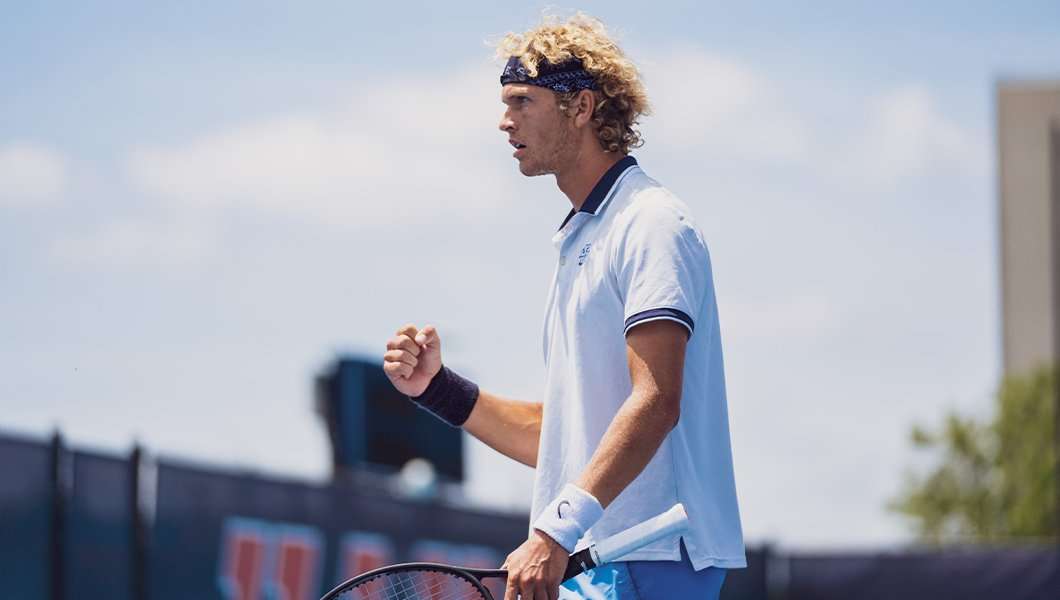 Virginia’s Associate Head Coach Scott Brown was an integral part of the Cavaliers success in the 2022 season. Now in his fifth season as the Assistant Coach with Virginia, Brown reached new heights as a coach in 2022 helping the Cavaliers win the 2022 NCAA Team National Championship. Serving as a great mentor and player developer as well, Brown helped Virginia place five players on All-ACC teams this season as well as two ITA Singles All-Americans.

Sam Riffice has been blazing trails at the University of Florida ever since he arrived on campus four years ago. Named a team captain his freshman season in 2018, Riffice has been a leader for the Gators on and off the court every day since. Bolstering the highest GPA out of any player on the team, Riffice has earned many accolades from the ITA, SEC, and CoSIDA for his academic achievements while also serving as a four-year tennis representative on the Student-Athlete Advisory Committee. On the court, Riffice’s accolades shine just as bright. After taking his team to an NCAA National Championship in 2021, Riffice also went on to win the NCAA Singles National Championship just weeks after and has been named an All-American four times over his career.

Anyone within the West Coast Conference will tell you that Pepperdine’s Tim Zeitvogel has been a force to be reckoned with during his time with the Waves. However, what some might not know is exactly how involved Zeitvogel is within his community and home country of Germany. At Pepperdine, Zeitvogel is the President of the Waves Leadership Council (SAAC), while also serving as the student-athlete representative of the WCC at the President’s meeting. As a mathematics major, Zeitvogel has spent his free time studying the second wave of the Covid-19 pandemic and has presented at numerous high-level conferences over these past few years.

In his first season with the Sun Devils, Murphy Cassone has shown that he is one of the top players in all of college tennis in just his first year at the collegiate level. Playing from Arizona State’s No. 1 position, Cassone went unbeaten in Pac-12 play this season and earned Pac-12 First Team and Pac-12 Freshman of the Year honors for his efforts. Earning a berth into the NCAA Singles Championship, Cassone finished his freshman campaign with a 15-5 singles record, including wins in 13 of his final 15 matches.

For many who know Jack Winkler, they would say that it is a miracle in and of itself that he was able to suit up again for Michigan State and compete this season. Sidelined the past two and a half years with numerous health issues, Winkler entered the 2022 season just looking to crack the Spartans doubles lineup. However, he not only cracked the doubles lineup but exceeded all expectations by reaching the No. 1 singles position by the end of the season. With his efforts and outstanding play this season, Winkler became the first Spartan since 2015 to earn All-Big Ten Honors.

In his senior season with San Diego, August Holmgren put together one of the most storied seasons in program history and became the face of San Diego Athletics for his charisma on and off the court. Beginning in the Fall, Holmgren was the Runner-Up at the ITA All-American Championship before winning the ITA Fall Championships later in the year to earn the No. 1 ranking heading into the spring. In the spring, Holmgren went unbeaten in WCC play and earned a birth into the NCAA Singles Championship for his standout play all season long. Here Holmgren would go on to finish as the NCAA National Runner-Up and earn ITA All-American status for the third time in his career.

After a stellar freshman season in which he helped lead the Florida Gators to an NCAA Team National Championship, sophomore Ben Shelton not only remained dominant but elevated his game to even further heights. After winning the 2021 ITA All-American Championship, Shelton took a lot of momentum into the spring season where he would flourish. Ranking as the No. 1 player in the nation for a majority of the season, Shelton entered the 2022 NCAA Singles Championship as the No. 1 seed in the Tournament after earning SEC Player of the Year honors for his stellar play over the regular season. In the NCAA Singles Championship, Shelton would show why he has earned all of these honors over his career as he took home the NCAA Singles National Championship and became the second Florida player since 2000 to finish the season as the No. 1 ranked player in the nation.