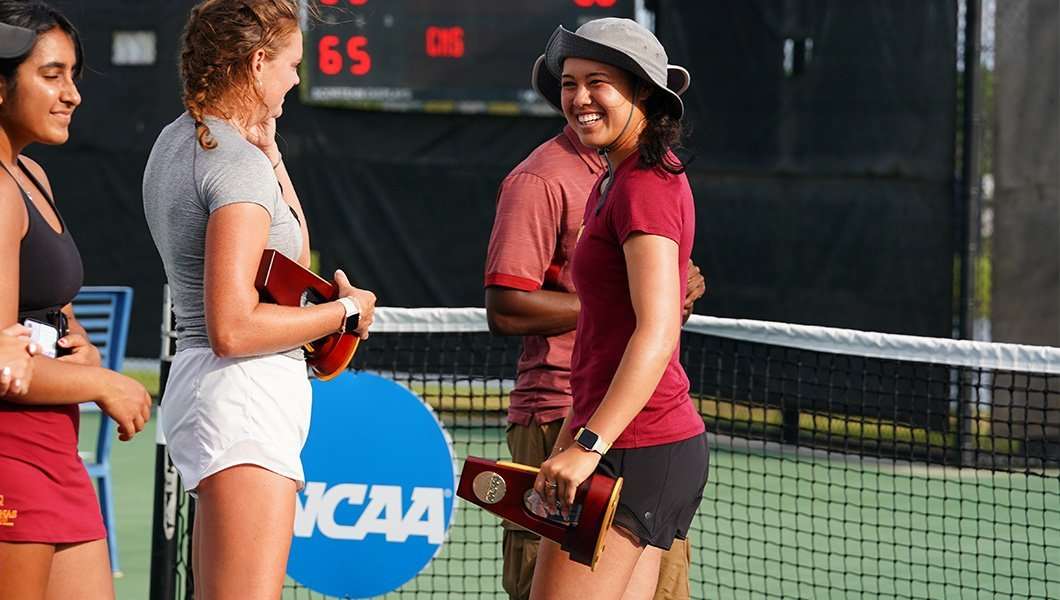 Within the sport of college tennis, having an assistant coach or volunteer assistant coach who still plays events on the pro circuit is not that much of an uncommon site.

However, for Claremont-Mudd-Scripps Assistant Coach, Angela Kulikov, her story is quite unique as all of her hard work as both a player and a coach would result in one of the most unforgettable weekends this past May in Orlando, Florida.

As a native of Sun Valley, California, Kulikov has always had a love for tennis and as a junior, she quickly rose up the national rankings, becoming one of the most highly touted recruits across the country.

Choosing to stay close to home, Kulikov would enroll at the University of Southern California where she would go on to have a very decorated career with the Women Of Troy.

Playing from the Fall of 2016 until the Spring of 2021, Kulikov would earn ITA All-American honors in doubles, All-Pac-12 honors, and in June of 2021 would be named the Southwest Region ITA Arthur Ashe Jr. Leadership and Sportsmanship Award Winner.

However, what is not seen within the bios and accolades over Kulikov’s career are all of the adversities she faced over the final years of her collegiate career.

After arguably her most successful season in 2018-19, Kulikov’s senior season would have to be put on hold in the spring of 2020 due to the Covid-19 Pandemic.

Deciding to utilize her extra year of eligibility with the Women of Troy during the 2020-21 season, Kulikov will suffer a serious injury very early in the spring which would sideline her for the foreseeable future.

Having not played more than a handful of competitive matches in nearly two years, Kulikov knew she had to put her professional aspirations aside while she continued to train and recover from her injury.

Deciding to give back to the game that gave her so much, Kulikov accepted a position in the Fall of 2021 to become an Assistant Coach at the esteemed Division III institution, Claremont-Mudd-Scripps, where she could continue to train while simultaneously growing her knowledge as a coach from fellow Assistant Coach, and former Indiana standout, Caitlin Bernard as well as Head Coach Dave Schwarz.

Hovering within the top ten of the ITA Collegiate Tennis National Rankings for the majority of the season, Kulikov had an instrumental role in leading Claremont-Mudd-Scripps this past spring to an impressive 20-3 regular-season record and a birth into the NCAA Tournament.

Taking down Oneonta and Case Western Reserve in the Second and Third Rounds of the NCAA Tournament, the Athenas secured their spot in the NCAA National Tournament which would be held at the USTA National Campus in Orlando, Florida later in May.

While all of this success was happening in Kulikov’s coaching role, in her free time she was still putting in work as a player, and when she saw that there would be a 60k ITF/USTA Tournament coinciding with the NCAA National Finals at the USTA National Campus she knew this would be an opportunity she could not pass up.

Beginning by coaching the Athenas in the NCAA National Tournament, Kulikov would help lead CMS to Quarterfinal and Semifinal victories on May 23rd and May 24th to clinch a spot in the National Finals again the No. 1 team in the nation, the University of Chicago.

Unable to relish in the victory for too long, Kulikov and Head Coach Dave Schwarz, who also serves as Kulikov’s Coach, immediately turned their attention to the 60K ITF/USTA Tournament which would begin play the following day in which Kulikov and her partner Sophie Chang would be competing in the doubles competition in.

Advancing via walkover in her first match, Kulikov and Chang would take on the third-seeded pair in the tournament in the Semifinals where they would go on to win in a third-set tiebreaker to advance to the finals.

Now in her second championship in just four days’ time, Kulikov and her partner Chang would go on to win the Doubles Title to cap off one memorable week for Kulikov and her team at the USTA National Campus.

The victories marked the crescendo to countless hours of work on and off the court for Kulikov as she not only made a resounding return to the courts as a player but also showed her value as a coach by winning a National Championship with CMS.

Today, Kulikov currently ranks No. 123 in the WTA Doubles Rankings and plans to return to the Athenas for the 2022-23 season where she will once again look to help lead the team to the pinnacle of Division III Women’s college tennis. 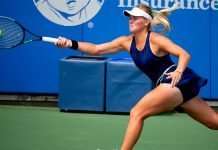 A Celebration of College Tennis at the 2022 Western & Southern Open 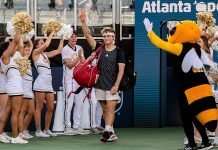 Current and Former Collegiate Stars Shine at the Atlanta Open

August 3, 2022
We use cookies to ensure that we give you the best experience on our website. If you continue to use this site we will assume that you are happy with it.OkPrivacy policy