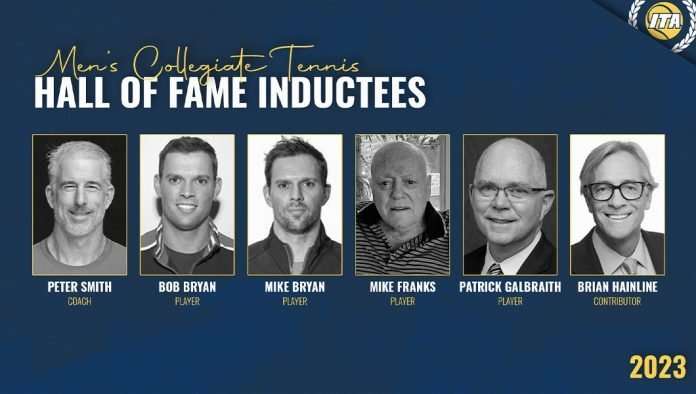 The 2023 ITA Men’s Collegiate Tennis Hall of Fame Induction will take place in Lake Nona, Florida, during the annual ITA Coaches Convention when the USTA’s National Campus hosts the NCAA DI, DII, and DI Tennis Championships in May. More details surrounding the luncheon and ceremony will be announced in the coming weeks. If you are interested in attending the Induction Ceremony, please get in touch with Rachel Dagen, ITA Director of Special Projects (rdagen@itatennis.com)

“Wow! Another great class” proclaimed ITA Chief Executive Officer Dr. Timothy Russell. “The ITA’s Men’s College Tennis Hall of Fame Class of 2023 is a reminder of the extraordinary accomplishments achieved by college tennis coaches, players, and contributors to our sport.  I am particularly excited that we are returning to inductions following the worldwide pandemic and that this special induction ceremony will be part of a large celebration of college tennis in May of 2023.”

“This is one of the most accomplished classes we’ve ever had, from the greatest doubles team in tennis history in the Bryan brothers to one of the best coaches of the modern era in Peter Smith,” states ITA Collegiate Tennis Men’s Hall of Fame Curator John Frierson. “It’s also great to have some doubles stars stepping into the spotlight with the Bryans and Patrick Galbraith, all of whom reached No. 1 in the world. It’s a special class, and it will be our honor to have them stand alongside the best of the best in the Hall of Fame.”

Peter Smith, USC (2003-2019) – During Smith’s 17 years at the helm of the USC Men’s Tennis team, he captured a career record of 381-105 while leading the Trojans to five NCAA DI Team National Titles, including four straight from 2009-12. Over his tenure with the Trojans, Smith was twice named the ITA National Coach of the Year and was a five-time Pac-12 Coach of the Year. Smith is believed to be the only men’s tennis coach to lead four different programs to Top-25 Rankings and to lead three schools to the Quarterfinals of the NCAA Team Tournament and Top-5 Rankings (USC, Pepperdine, Fresno State).

Bob Bryan, Stanford (1997-98) – Over his two seasons with the Stanford Men’s Tennis team, Bob Bryan would put together some of the most dominant all-around seasons by a player in college tennis history. In 1998, Bob won the NCAA triple crown, capturing the singles and doubles titles (with brother Mike) after helping lead the Cardinal to the team title and an undefeated season. This would mark the second consecutive title for Bob and the Cardinal, as he also helped Stanford win the team title in 1997.

With his brother Mike, the duo would become the most successful professional doubles team of all time, winning 16 Grand Slam doubles titles and earning recognition as the ATP Team of the Decade for the 2000s. Bob also won seven Grand Slam titles in mixed doubles and was the No. 1-ranked doubles player in the world for 439 weeks. Bob and Mile won at least one Grand Slam title each year for 10 years, and in 2012 the Bryans clinched the career Golden Slam, having won all four Slam titles and won the Olympic gold medal.

Mike Bryan, Stanford (1997-98) – As a two-time NCAA National Champion with the Stanford Men’s Tennis team, Mike Bryan would leave his legacy at both the collegiate and professional levels of play. In 1998, alongside his brother Bob, Mike would take home the NCAA Doubles Title just days after helping lead the Cardinal to the team title and an undefeated season.

At the professional level, Mike, alongside his brother Bob, would become the most successful professional doubles team of all time, winning 16 Grand Slam doubles titles and earning recognition as the ATP Team of the Decade for the 2000s. Mike and Bob won at least one Grand Slam title each year for 10 years, and in 2012 the Bryans clinched the career Golden Slam, having won all four Slam titles and won the Olympic gold medal. Mike also teamed up with Jack Sock to win Wimbledon and the US Open in 2018 when Bob was out with a prolonged hip injury and has also won three Davis Cup matches with other partners.

Mike Franks, UCLA (1956-58) – When looking at the UCLA Men’s Tennis program, it would be hard to find a more influential or dominant player than Mike Franks. Leading the Bruins to an NCAA National Championship in 1956, Franks only lost one match in his UCLA career, which came to Alex Olmedo (original ITA Hall of Fame class inductee). Franks was an All-American in 1957-58 and played No. 1 for the Bruins all three of his seasons, once reaching the semifinals of the NCAA singles (losing to Olmedo) and finals of the doubles. He later reached the third rounds of Wimbledon in 1957 and 1964 and the U.S. Open in 1958.

Patrick Galbraith, UCLA (1986-89) – As another UCLA standout, Galbraith and partner Brian Garrow won the NCAA Doubles Championship in 1988, beating fellow Bruins Buff Farrow and Robert Bierens in an all-UCLA final. After turning professional, Galbraith began a steady climb to No. 1 in the world, which he reached in 1993 with partner Grant Connell. He won Grand Slam mixed doubles titles at the U.S. Open in 1994 (with Elna Reinach) and 1996 (with Lisa Raymond) and reached the semifinals of all four Grand Slams and the finals of Wimbledon in 1993 and 1994. Galbraith was a 1996 U.S. Davis Cup team member and finished his pro career with 36 doubles titles. He is a past president of the USTA, a position he held in 2019-20, and he served as Chairman of the US Open. He spent more than a decade on the USTA Board of Directors.

Brian Hainline – As the NCAA’s first Chief Medical Officer since 2013, a role that took on increased importance during the coronavirus pandemic, Hainline oversees the NCAA Sport Science Institute and everything that addresses the health and safety of NCAA student-athletes, including critical research into concussions. He’s been involved in sports medicine for more than 25 years, including serving as the Chief Medical Officer of the U.S. Open (1992-2007) and the USTA.

Hainline played at Notre Dame in the 1970s under Hall of Fame coach Tom Fallon. After graduating, he attended medical school at the University of Chicago-Pritzker School of Medicine. Along with his work with the NCAA, he is a neurology professor at the Indiana School of Medicine and the NYU Langone Medical Center.

About The ITA Men’s Collegiate Hall of Fame

The ITA Men’s Collegiate Tennis Hall of Fame is housed at the University of Georgia’s Henry Field stadium in Athens. The late legendary Georgia men’s tennis coach and Hall of Famer Dan Magill served as curator and chairman of the Hall of Fame. The current curator is John Frierson. The ITA Men’s Hall of Fame, which includes over 1,800 rare photos, inducted its first class in 1983 and has inducted more than 260 players, coaches, and contributors since then. Players are eligible for election to the Hall of Fame 10 years after the conclusion of their participation on the team and once they are no longer participating on the pro tour. Coaches are eligible immediately following retirement. The main criteria for election are college accomplishments and honors earned after college.

The Intercollegiate Tennis Association (ITA) is committed to serving college tennis and returning the leaders of tomorrow. As the governing body of college tennis, the ITA oversees men’s and women’s varsity tennis at NCAA Divisions I, II, III, NAIA, and Junior/Community College divisions. The ITA administers a comprehensive awards and rankings program for men’s and women’s varsity players, coaches and teams in all divisions, providing recognition for their accomplishments on and off the court.