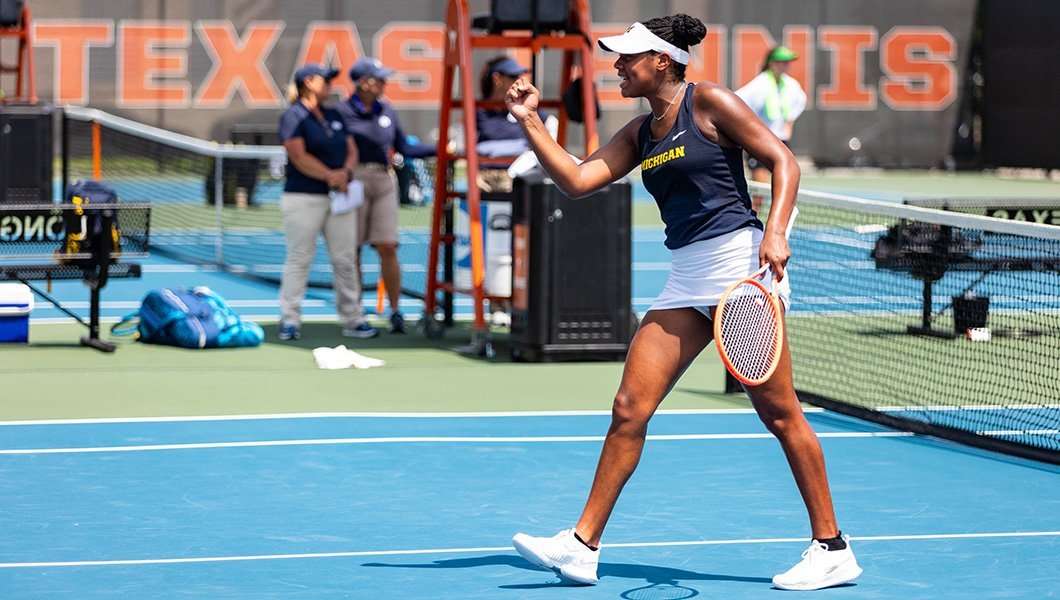 CINCINNATI (July 14, 2022) – In addition to watching final qualifying and first-round action at the Western & Southern Open, fans and alumni can cheer on six regional universities as their men’s and women’s tennis teams join up for a fierce but friendly College Tennis Showcase.

Teams from Ohio State, Michigan, Kentucky, Notre Dame, Louisville and Xavier will compete at 3 p.m. on Sunday, Aug. 14 as an added highlight to the pro tournament’s qualifying competition. The format will feature men’s and women’s doubles along with mixed doubles, something not typically seen in collegiate competition.

The exhibition matches will take place at Porsche Court, a sunken court located just north of Center Court and adjacent to the busy Partner Plaza.

“In addition to watching world-class professional players, fans and alumni can come out and cheer for their schools in this bragging-rights competition,” said Western & Southern Open Tournament Director Eric Butorac. “We wanted to give this opportunity to the college players to expose them to the world’s best while showcasing their talent to local fans.”

The day will also include panel discussions in the new Grand Courtyard fan experience area, featuring current collegiate players and pro players who played in college. Additionally, coaches from each of the participating schools will provide information about their programs for current high school students to explore and discuss while on-site. Fans of all ages are encouraged to attend.

There will be plenty of pride on the line. Ohio State, Kentucky and Michigan ended the year ranked among the top 10 men’s programs in the nation, with Kentucky defeating Ohio State to reach the NCAA Championships final. The Ohio State and Michigan women ranked in the nation’s top 20 teams. Ohio State’s men’s and women’s teams are the reigning Big Ten regular-season champions, while Michigan’s
men and women won the season-ending Big Ten tournaments. Kentucky’s women ranked inside the nation’s top 75.

While the College Tennis Showcase is new, college players have long been a feature in the draws of the Western & Southern Open. Since the tournament began in 1899, 69 different men’s collegiate champions have played in the tournament, including locals Reuben Holden (1910, Yale), Barry MacKay (1957, Michigan) and 1951 Western & Southern Open champion Tony Trabert, who also won the 1951 college title playing for Cincinnati. On the women’s side, 27 different college champions since competition began in 1959 have played the Cincinnati tournament including local player Nicole Gibbs (2012-13 NCAA champion for Stanford) and the two most recent collegiate winners – 2021 champ Emma Navarro (Virginia) and Mason’s own Peyton Stearns, the 2022 NCAA champion for Texas.

Tickets for the Western & Southern Open are on sale now at www.wsopen.com. Individual daily tickets for each session remain available, however multi-day packages are sold out.

The Western & Southern Open features a WTA 1000 and an ATP Masters 1000 tournament in the same week at the same venue, making it one of five events to host concurrent top tier tour tournaments along with Indian Wells, Calif., Madrid, Miami and Rome.

Since becoming a single-week tournament featuring both tours in 2011, the Western & Southern Open has attracted more than 1.8 million spectators, including ticket buyers who have traveled to Cincinnati from all 50 states and more than 35 countries. International broadcast agreements deliver coverage to more than 50 million viewers in over 160 countries.

The Western & Southern Open will be held Aug. 13-21 at the Lindner Family Tennis Center in Mason, Ohio. The 2021 singles championships were won by Ashleigh Barty and Alexander Zverev while the doubles titles were claimed by Sam Stosur & Zhang Shuai and Marcel Granollers & Horacio Zeballos.

About the US Open Series
The US Open Series serves as a true “regular season” of summer tennis in North America, linking nine WTA and ATP Tour tournaments to the US Open. Featuring a cohesive weekly viewing schedule, as well as comprehensive outreach and grassroots engagement initiatives, the Series serves as a vital platform to promote and grow the game of tennis in person and at home. Fans can follow along all summer as today’s top champions go head-to-head with tomorrow’s emerging stars, while each tournament engages its local community with a variety of programs geared toward showcasing and promoting the game to new and existing fans.

About the WTA
Founded by Billie Jean King in 1973 on the principle of equal opportunity, the WTA is the global leader in women’s professional sports. The WTA is one of the world’s most recognizable and high-profile sports organizations, consisting of more than 1600 players representing approximately 87 nations, all competing to earn WTA rankings points and prestigious tournament titles. The Hologic WTA Tour is comprised of around 50 events and four Grand Slams, spanning six continents and nearly 30 countries and regions with a global audience of over 900 million. Further information on the WTA can be found at www.wtatennis.com.

About the ATP
As a global governing body of men’s professional tennis, the ATP’s mission is to serve tennis. We entertain a billion global fans, showcase the world’s greatest players at the most prestigious tournaments, and inspire the next generation of fans and players. From the ATP Cup in Australia, to Europe, the Americas and Asia, the stars of the game battle for titles and Pepperstone ATP Rankings points at ATP Masters 1000, 500 and 250 events, and Grand Slams. All roads lead towards the Nitto ATP Finals, the prestigious season finale held in Turin, Italy. Featuring only the world’s top 8 qualified singles players and doubles teams, the tournament also sees the official crowning of the year-end ATP World No. 1, presented by Pepperstone, the ultimate achievement in tennis. For more information, please visit www.ATPTour.com.

February 16, 2019
We use cookies to ensure that we give you the best experience on our website. If you continue to use this site we will assume that you are happy with it.OkPrivacy policy