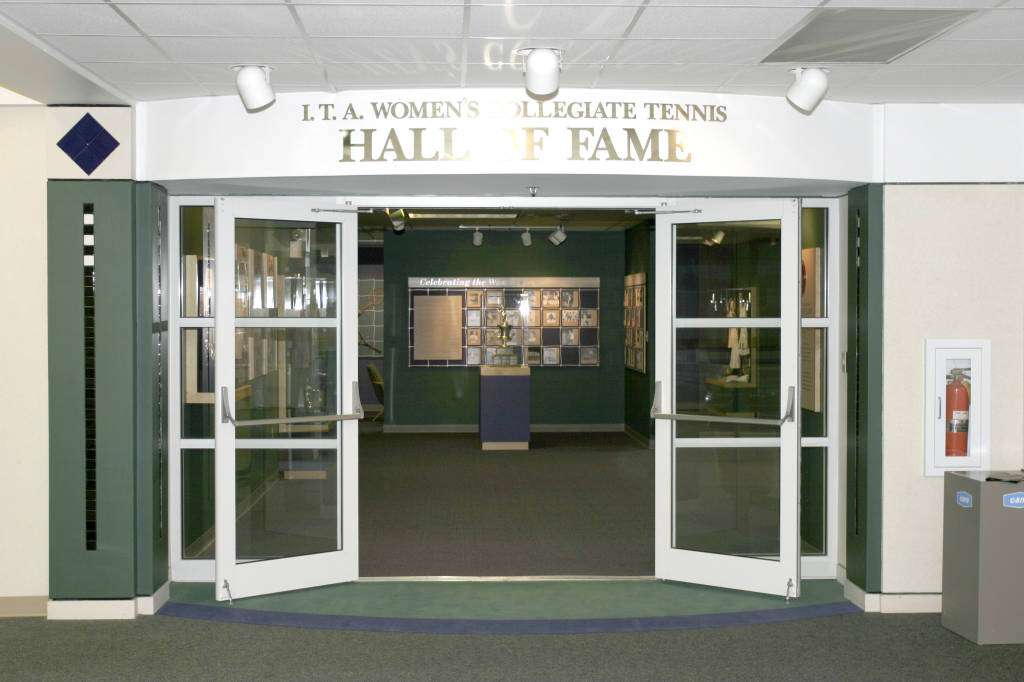 With a rich history that features many of the sport’s greatest women’s collegiate players and coaches, the ITA Women’s Hall of Fame inducted its first class in 1995 and has since recognized nearly one hundred men and women who have had lasting contributions to the sport.
On September 17th, four more honorees will join the exclusive company of inductees who have earned the status of “ITA Women’s Collegiate Hall of Famer”. These individuals include Diane Donnelly Stone, AnnaMaria Fernandez-Ruffels, Lin Loring, and Lisa Spain Short who will all be a part of the 2022 ITA Women’s Collegiate Hall of Fame Class.

Playing collegiately for Northwestern University, Diane Donnelly Stone has been deeply involved with tennis her entire life. After starting to play at age six and dominating as a junior, Diane competed for Northwestern leading the team to back-to-back Big Ten Conference titles. Alongside partner Katrina Adams, Diane won the 1987 NCAA Doubles National Championship. The Championship was Northwestern’s second NCAA title and the first for a female athlete. Diane was a three-time All-American and four-time All-Big Ten honoree. She was also awarded the ITA Unsung Hero Award.

After her four years at Northwestern, Diane played on the WTA circuit reaching the US Open Doubles main draw with Adams but retired early due to ankle surgery. After playing professionally, Diane joined World Team Tennis eventually rising to Vice President and overseeing the nationwide recreational league. In addition to her work with World Team Tennis, Diane is the Executive Director of the Donnelly Awards — a scholarship fund that supports tennis student-athletes who live with diabetes.

AnnaMaria Fernandez-Ruffels graduated from the University of Southern California with a Broadcast Journalism degree. The former Women of Troy put together a stellar collegiate career before joining the WTA Tour. Fernandez-Ruffels helped the Trojans to back-to-back team National Championships in 1979 and 1980. In 1981, AnnaMaria went on to win the AIAW Singles National Championship and was awarded the Broderick Award, which is presented annually to the nation’s best collegiate women’s tennis player. Professionally, she won five WTA titles in doubles and reached a career-high doubles ranking of No. 44. In singles play, AnnaMaria ranked as high as No. 19 in the world.

Former Indiana and UCSB head coach Lin Loring has committed his life to advancing the sport of tennis. Loring started his illustrious coaching career at his alma mater before spending 40 years coaching the Hoosiers. Loring is the all-time win leader in women’s college tennis. With his 846 career wins, Loring is the only Division I Women’s tennis coach to amass over 800 wins. In addition, he coached Indiana to 16 Big Ten titles and an AIAW National Championship — the first national championship for a Hoosiers women’s program. The two-time National Coach of the Year mentored 25 All-Americans at Indiana.

Loring sat on the ITA Board of Directors for over 30 years. During this time, he was instrumental in the creation of two iconic ITA events — the ITA USTA Summer Circuit and the ITA Women’s National Team Indoor Championships. In 2000, Loring was honored with the ITA Meritorious Service Award for his monumental contributions to college tennis.

Before graduating from the University of Georgia in 1984, Lisa Spain Short cemented her name in the record books. Lisa became the first All-American in Georgia women’s tennis history — she went on to be a four-time All-American and a four-time All-SEC honoree. In her final two years, Lisa was almost unstoppable. She amassed a 71-7 record during her last two collegiate years and won the 1983 ITCA Riviera All-American Singles Championship. In her final year with the Bulldogs, Lisa won the NCAA Singles National Championship and was awarded the Broderick Award, which is presented annually to the best collegiate women’s tennis player in the country. To date, Lisa is one of three Bulldogs to be awarded the honor. She went on to play professionally and reached a career-high WTA singles ranking of No. 63.

For more information on the 2022 induction class and to purchase tickets for the upcoming ITA Women’s Collegiate Hall of Fame induction ceremony, visit the new Women’s Hall of Fame website below.