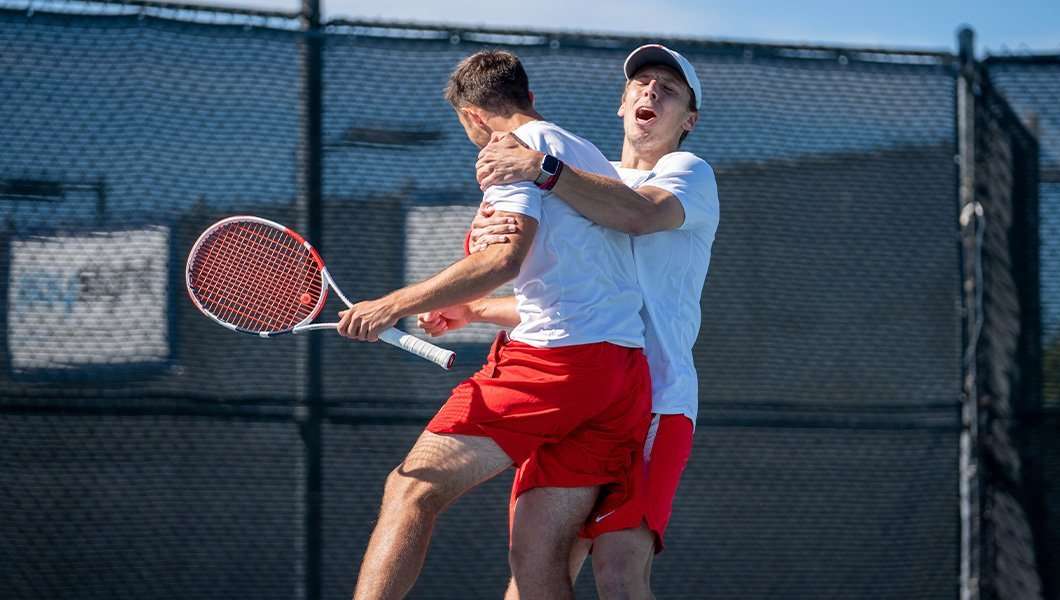 SAN DIEGO, CA. – In today’s Semifinal Round of play from the 2022 ITA National Fall Championships, the top players in college tennis shined, earning their spots into the Singles and Doubles Championship Matches.

Saturday’s singles matches provided end-to-end excitement as we saw three of the four Semifinals get decided in decisive third sets.

On the Men’s side, the top 4 seeds were on display as Garrett Johns [1] (Duke) faced off against Eliot Spizzirri [4] (Texas) while Antoine Cornut-Chauvinc [2] (Florida State) played Nishesh Basavareddy [3] (Stanford).

Spizzirri and Basavareddy came out firing, both winning the first set with scores of 6-0 and 6-2, respectively. Johns and Cornut-Chauvinc, the top two seeds, were then able to fight back and give themselves an opportunity at a third set with 6-4 and 6-1 second-set victories.

In the final sets, Spizzirri and Basavareddy found their lost momentum and were able to capitalize on their first victories with 6-3 and 6-2 third set wins, giving them the match, and their ticket to the Men’s Singles Championship on Sunday.

Women’s Singles, was a tale of two matches, with one match finishing up in under an hour, while the other pushed the four hour mark.

On the other half of the draw, 3 hours and 45 minutes were required to complete our matchup of Daria Frayman (Princeton) and Connie Ma [2] (Stanford), which was the longest match of the tournament thus far.

Ma who came out swinging, took the first set 7-5, before Frayman would go on to take the following set 7-6 (8), bringing the Semifinal matchup to the three hour mark and the decisive third set.

Both Frayman and Ma provided wire to wire to action as the final set was brought into a  tie-break after consecutive holds of serve. It would be Frayman that would go on to win after taking the tiebreaker with a score of 7-4, after almost 4 hours of play.

For the women, both top-seeded teams made their way into the Finals as it will be Savannah Broadus and Janice Tjen [1] (Pepperdine) taking on Fiona Crawley and Carson Tanguilig [2] (North Carolina) in the Championship Match.

The Finals appearance marks the second consecutive ITA Fall National Championship Women’s Doubles Championship berth for Crawley as she will look to make it back-to-back Titles after winning last season with Elizabeth Scotty.

Pepperdine, who entered as the top-seeded women’s doubles team, will look to try to win their first-ever ITA Fall National Championship tomorrow as Broadus and Tjen try to make even more history in just their second season as a pairing.

On the men’s side of play, two of the top four seeds will be battling it out as well, with Alexander Jong and Lui Maxted [3] (TCU) set to take on Andrew Lutschaunig and JJ Tracy [4] (Ohio State) in the Championship Match.

Jong and Maxted fought off a difficult test from Berk Bugarikj and Patrik Trhac (Utah) in today’s Semifinal match to earn their spot in the Championship, while becoming the first Horned Frogs team to reach the Finals at the National Fall Championships.

Similarly to North Carolina on the Women’s side, Lutschauning and Tracy are looking to make it back-to-back Doubles Titles for Ohio State, following in the footsteps of Robert Cash and Matej Vocel who claimed the crown last season.

Tomorrow’s Championships matches are set to begin at 10 am (PST) from the Barnes Tennis Center with Women’s Singles and Men’s Doubles getting underway first.