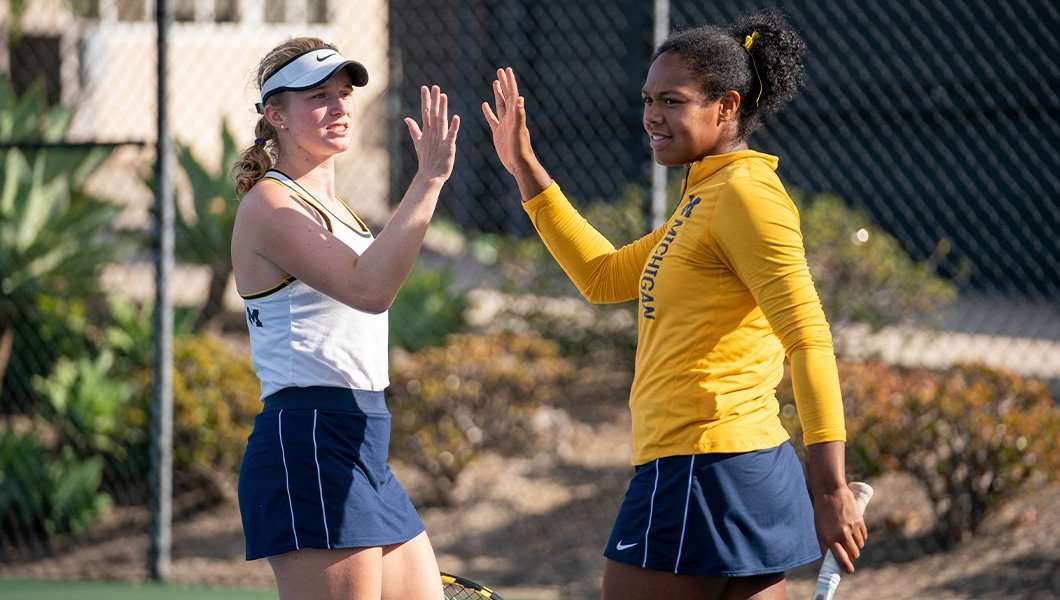 SAN DIEGO, CA. – After three days of elite-level singles and doubles play from the Barnes Tennis Center, the Semifinalists are now set for the 2022 ITA National Fall Championships.

Fighting off some brisk conditions on the first two days of action, day three offered lots of sunshine and perfect conditions to complement the back-and-forth battles going on across all courts during todays Quarterfinal play.

In the women’s singles draw, the top two seeds in the draw handled business today as Fiona Crawley (North Carolina) and Connie Ma (Stanford) each punched their tickets to tomorrow’s Semifinals where they will join Carol Lee (Georgia Tech) and Daria Frayman (Princeton).

For Crawley, this marks her second consecutive Semifinal appearance at an ITA National Individual Tournament as she reachd the Semifinals at the 2022 ITA Women’s All-American Championships before eventually winning the Championship.

Ma and Frayman each have extensive Semifinal and Final experience over their time at the collegiate level as Ma was the 2022 NCAA Singles Runner-up, while Frayman finished as the Singles Runner-Up at the ITA National Fall Championships last season.

On the men’s side of play, all four of the top seeded players will battle it out in the Semifinals as Garrett Johns (Duke), Antoine Cornut-Chauvinc (Florida State), Nishesh Basavareddy (Stanford), and Eliot Spizzirri (Texas) all won in today’s Quarterfinal matches.

For Johns and Spizzirri this will be a familiar matchup in tomorrow’s Semifinals as the two faced off in Tulsa during the ITA Men’s All-American Championships in which Spizzirri won 6-3, 4-6, 6-4 over Johns.

Doubles play saw even more top seeds succeed, as both top seeds advanced to the Semifinals on the Women’s side of play, while two more seeded teams will join them in the Semifinals from the 5-8 seeded range.

Crawley, who won the 2021 ITA National Fall Championship Title with Elizabeth Scotty, will look to repeat with new partner Carson Tanguilig in 2022 as the second seeded duo have cruised through the draw to this point winning each of their matches in straight sets.

On the other side of the draw, top seeds Savannah Broadus and Janice Tjen will look to become just the third team from Pepperdine to advance to the ITA National Fall Championships Final, and could become the first team to win if they can take care of business in their next two matches.

Men’s doubles has three seeded teams in the Semifinals, including the three seeds Alexander Jong and Lui Maxted (TCU) and the four seeds Andrew Lutschaunig and JJ Tracy (Michigan).

Berk Bugarikj and Patrik Trhac (Utah) are the only unseeded team left in the draw as the duo have taken down some of the top teams in the country en route to the Semifinals where they will try to become the second team in program history to advance to the ITA National Fall Championships Doubles Final.

Play begins at 10 am (PST) from the Barnes Tennis Center with singles to lead off the day and doubles to follow shortly after.