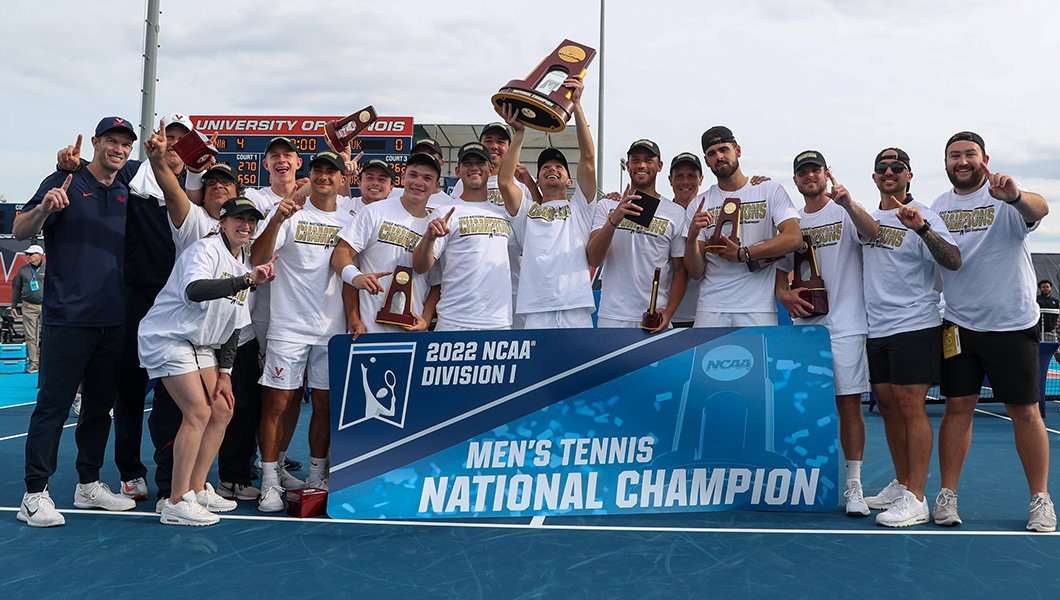 TEMPE, AZ. – The 2022 dual-match season for the Virginia Cavaliers was one of many trials and tribulations. However, when they were needed the most, this Virginia team knew what it took to win and rallied off 23 straight wins on their way to the 2022 NCAA Men’s National Championship.

Beginning the spring with high expectations as the No. 7 ranked team in the ITA Collegiate Tennis Rankings sponsored by Tennis-Point, the Cavaliers came into 2022 with a very experienced team that they would have to lean on if they wanted to be successful.

After beginning with a perfect 5-0 record and berth into the ITA National Team Indoor Championship, Virginia quickly faced its toughest stretch of the season, losing five straight matches to leave players and coaches wondering what needed to be changed.

Facing Ohio State (1), Baylor (3), Florida (5), and TCU (4) twice over this four-match slide, the Cavaliers were beaten down match after match and didn’t show early on that they had what it took to hang with the nations best.

Then in the Feb. 23 ITA Collegiate Tennis Team Rankings, Virginia took a big dive, dropping from No. 7 to No. 17 as the Cavaliers struggled to stay above .500 on the season.

Picking up a win over Washington in their final match at the ITA National Team Indoor Championships to end their five-match slide, Pedroso knew now was the time to rally his players as it was evident that something needed to change if Virginia wanted to salvage something out of this season.

Heading into ACC play, Pedroso made some tweaks to both his singles and doubles lineup which immediately made an impact on the team’s performance.

Now with some momentum behind them, Virginia would end the regular season by winning 14 consecutive matches and would clinch the No. 1 seed in the ACC Tournament to complete the total transformation of a team who was once 5-5 to start the season.

Finding their way back into the Top-Ten of the ITA Collegiate Tennis Rankings, Virginia made quick work of Florida State in Louisville in the first two rounds of the ACC Championship before facing North Carolina in the Finals which proved to be a battle of two heavyweights.

After dropping the doubles point to the Tar Heels, Virginia knew it needed to win at least four singles matches in order to clinch its second consecutive ACC Championship and its 14th Championship in program history.

Dropping the first set from four spots in the lineup, the Cavaliers hopes were looking dim until fifth-year player Gianni Ross was able to pick up a point from the No. 6 position to level the score at 1-1 between the two teams.

Shortly after the point from Ross, Virginia picked up points from the No. 3 and No. 4 position to take the brief 3-1 advantage before the Tar Heels fought right back winning from the No. 1 and No. 5 positions to level the match at 3-3.

With the fate of the match now resting on the No. 2 position, sophomore Inaki Montes pulled through when the lights were the brightest beating Benjamin Sigouin 6-4, 2-6, 7-6 (7-3) to clinch the victory and the ACC Championship.

Having now won 17 consecutive matches, the Cavaliers entered the 2022 NCAA National Tournament as the No. 7 seeded team in the nation as they still had much to prove if they wanted to show they could compete with the nation’s best.

Making quick work of Fairleigh Dickerson and Virginia Commonwealth in the Regional, Virginia would then face tenth-seeded South Carolina in the Super Regional where they did not slow down, winning 4-0 to punch their ticket to Champaign, IL for the National Quarterfinals.

Squaring off with a familiar foe and the No. 2 seeded team in Florida, Virginia was looking to avenge one of their five earlier losses on the year when the Gators bested them 4-2 at the ITA National Team Indoor Championships.

Starting the match off with huge wins from the No. 1 and No. 2 doubles positions, Virginia would head into singles with a 1-0 advantage over the Gators and wouldn’t look back, winning from the No. 2, No. 3, and No. 5 singles positions to win the match and advance to the Semifinals.

Now set for a date with No. 6 Tennessee, the Cavaliers dominated in every aspect of the match and quickly showed that they were a totally different team from the one who started the season 5-5, earning their spot into the NCAA National Championship where they would face No. 8 Kentucky.

For head coach Andres Pedroso, this National Championship marked his first at the helm of the Cavaliers as his coaching and lineup changes helped lead Virginia to 23 straight wins to end the season after all looked lost to begin the year.